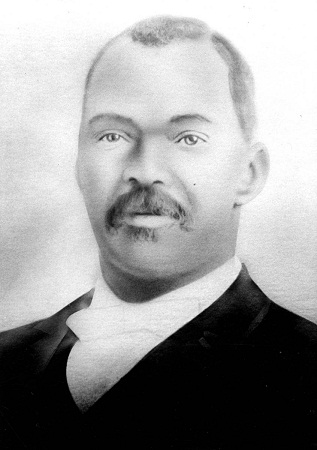 Daniel Jackson Sanders, Presbyterian clergyman, editor, and educator, one of five children of William and Laura Sanders, was born a slave near Winnsboro, S.C. His mother was owned by the Reverend Thomas Hall, a Methodist minister, and his father was owned by Major Samuel Barkley, a Confederate officer and shoemaker. Shortly after Sanders's birth, Hall died and willed all of his property, including his slaves, to Barkley. The owners of Sanders permitted him to learn the alphabet, and at age nine he received his first instruction in the trade of shoemaking. After three years of tutelage, his master was able to collect pay for Daniel's services. By the time the Emancipation Proclamation went into effect, the boy had learned to read and spell, skills that he refined later in life.

According to his "Memoirs," in early March 1866, at about 3:00 A.M., the nineteen-year-old Sanders secretly left home in Winnsboro, taking with him only a small shoemaker's kit. His destination was Chester, S.C., where he worked at the only trade he knew, until befriended by two whites, John and William Knox, who lived near Chester. Tutored by the Knox brothers, Sanders by 1869 was ready to enter Brainerd Institute, a normal and industrial school in Chester.

Sanders was graduated after two years of study. He proved such an apt student that he was made a tutor at Brainerd in 1870. In the same year, he was licensed by the Fairfield Presbytery as a minister in the northern branch of the Presbyterian Church of the United States. In 1871 he entered Western Theological Seminary at Allegheny, Pa., where in 1874 he was graduated with honors and prizes in Hebrew and Sanskrit.

After graduation Sanders became the stated supply of the Chestnut Street Presbyterian Church in Wilmington. In 1875 he was appointed principal of that town's school for blacks. For these endeavors Lincoln University of Pennsylvania awarded him the honorary degrees of master of arts and doctor of divinity. In 1876 he resigned the positions of pastor and principal in order to go abroad to raise money for the Presbyterian Board of Missions for Freedmen. For more than a year, Sanders traveled with Scottish students in England and Scotland to raise money for the board. He returned to Wilmington with $6,120.17 committed to Biddle (now Johnson C. Smith) University, a Presbyterian institution for blacks in Charlotte. In 1878 he resumed his pastoral duties at the Chestnut Street Presbyterian Church in Wilmington, and during the same year he was named to the board of directors of Biddle University. On 1 Jan. 1879 he began to publish the Africo-American Presbyterian, a semimonthly religious and educational journal, which he continued to edit until his death.

On 16 Sept. 1880 Sanders married Fannie Price; they had nine children: Ruth, Irene, Alderia, Danetta, George, William, Daniel, Jr., Brooks, and one whose name is not recorded. One of his daughters, Danetta, became a professor at Hunter College in New York, and another daughter, Irene, taught music at Hampton Institute in Virginia.

Dr. and Mrs. Sanders remained in the Wilmington area until early 1891, during which time he served as pastor of the Pilgrims' Chapel and Chadbourn Presbyterian churches. At the end of the academic year 1890–91, the Reverend W. F. Johnson resigned as president of Biddle University. He was to be the last white president of that institution. Amid considerable controversy, the Board of Missions for Freedmen informed the General Assembly of the Presbyterian church that the purpose of Biddle was to create leadership qualities among blacks and that the time had come to put its teachings to the test. Accordingly, it recommended Daniel Sanders for the presidency. There was heated debate, during which three of the four white faculty members resigned and blacks were hired to replace them. After the smoke cleared, the church's ruling body (the General Assembly) agreed to the recommendation, and on 12 Oct. 1891 Sanders became the first black president of Biddle University.

Fondly called "Zeus" by his students, Sanders served as president of Biddle for seventeen years. During his administration, many firsts in the areas of education and sports were recorded. In 1892 the first black intercollegiate football game was played between Biddle and Livingstone College of Salisbury. The campus was expanded academically and physically. In 1891 fourteen students were graduated (seven in theology and seven in arts and science); that number increased threefold by 1907.

In 1905 Sanders revisited England as a delegate to the Pan-Presbyterian Alliance. The first black moderator of both the Yadkin and Cape Fear presbyteries, he also served as a stated clerk in the Atlantic and Yadkin presbyteries and the Catawba Synod.

Sanders became sick in December 1906 and died the following year. He was buried in the Ninth Street Cemetery in Charlotte, also known as Elldonwood Cemetery.