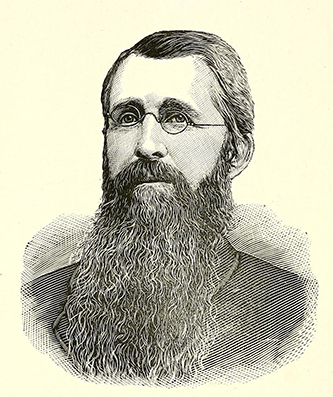 John Catre Scarborough, educator and educational administrator, was the eighth of ten children of Daniel and Cynthia Horton Scarborough, whose farm was located about fifteen miles east of Raleigh, Wake County, on the east side of Buffalo Creek. His paternal great-grandfather, Samuel, of English descent, had moved to Wake from Dinwiddie County, Va., in the mid-eighteenth century and served in the Revolutionary army. His maternal great-grandfather, Amos Horton, of Scottish descent, also was a soldier in the Revolution.

Prepared for college in a public school near his home and in the Buffalo Academy, young Scarborough deferred his further education with the outbreak of the Civil War. On 16 Apr. 1861 he volunteered in the company of Captain William Henry Harrison, known as the "Raleigh Rifles," which became Company K of the Fourth North Carolina Volunteer Regiment (later the Fourteenth Regiment, North Carolina Troops). Subsequently he was transferred to Company I, First Regiment, North Carolina Troops, where he remained until the end of the war, surrendering with the troops at Appomattox.

After the war Scarborough worked on his father's farm prior to enrolling in Wake Forest College in January 1866. Upon his graduation in June 1869, he was employed by the college as a tutor in Latin and mathematics—a position he retained until 1871. During the same two-year period he taught Latin in a school for young ladies that was operated by Mrs. James Simpson Purefoy of Wake Forest.

Except for the period he was commissioner of labor and printing for the state of North Carolina (15 Feb. 1889–20 Dec. 1892), Scarborough devoted the rest of his life to education and educational administration. During his varied career he served as principal of Selma Classical and Mathematical School, Johnston County (1871–76), state superintendent of public instruction (1877–85 and 1893–97), teacher at Thomasville Female College (1888–89), president of Chowan Baptist Female Institute (1897–1909), and superintendent of Hertford County Schools (1910–15). He spent his brief years of retirement in his home adjacent to the campus of Chowan College, Murfreesboro.

Apart from his role as classroom teacher, Scarborough's major contributions to public and private education in North Carolina are demonstrated by his work during the three terms he served as superintendent of public instruction and during his twelve-year tenure as president of Chowan Baptist Female Institute. Many of his recommendations to improve the public schools in North Carolina are reflected in the progressive measures enacted by the General Assembly in 1881 and 1885. Conversely, he considered his efforts to make further reforms to have been thwarted by the General Assembly of 1883 and by the ill-fated "school law" of 1879. In the latter instance, progressive legislation had passed both the house and the senate, only to be declared void when the speakers of those bodies failed to sign the measures before the legislature adjourned. Scarborough always believed that an opponent of the bill had deliberately removed it from the bundle of measures to be signed, "replacing" it after adjournment.

Scarborough's administration as president of Chowan Baptist Female Institute was marked by considerable improvements to the physical plant and by a general upgrading of the curriculum. Existing dormitory and classroom space nearly doubled with the erection of a four-story east wing to the major college edifice in 1905–6. Moreover, Scarborough used his experience as superintendent of public instruction to good advantage in modifying and refining the curriculum of an institution where many of the students were preparing to be public school teachers. He reduced the teaching load of faculty members and sought to standardize certain basic minimum requirements for the successful completion of the school's varied courses of study. By 1905–6 he had outlined and introduced a solid academic program, successful completion of which would justify the awarding of a baccalaureate degree, which replaced the "diplomas of proficiency" that previously had been granted to graduates of the institute's collegiate department.

A Democrat and a devout Baptist, Scarborough sat on one or more administrative boards and agencies of the Baptist State Convention of North Carolina each year from 1876 to 1917. He was elected vice-president of the convention on four occasions (1881, 1889, 1891, and 1896) and served three consecutive one-year terms as president (1882–84). He took a particular interest in the affairs of the Thomasville Baptist Orphanage, which he helped to establish and on whose board of trustees he served for twenty years (1897–1917), and in his alma mater, Wake Forest College, where he served as a trustee for forty-four years (1873–1917).