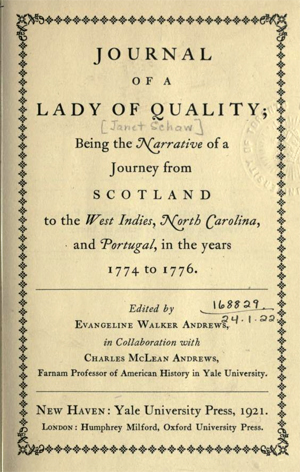 Janet Schaw, traveler and diarist, was born in Lauriston, a suburb of Edinburgh, Scotland. Little is known about her personal life. The editors of her journal conjecture that at the time of her voyage to America, she was about thirty-five or forty years old. Her father, Gideon Schaw, married Anne Rutherfurd on 23 Jan. 1723; she bore him six children. As early as 1726 Gideon and Anne were living at Lauriston Yards on a fourteen-acre farm, which at that time was outside the city limits of Edinburgh. Because Gideon held positions in other areas of Scotland from 1730 to 1751, no records of Janet's birth or baptism can be found. But it is believed that she spent many years in Lauriston, and that she was living there at the time of her father's death in 1772.

On 25 Oct. 1774 Miss Schaw and her brother Alexander, along with Fanny, an attractive girl of eighteen or nineteen, John, Jr., a lad of eleven, and William Gordon, who were the three children of John Rutherfurd, a prominent resident of North Carolina who had sent his children to Scotland for their education in 1767, all sailed aboard the Jamaica Packet, bound for the West Indies and North Carolina. Also on board were Mrs. Mary Miller (Janet's maid) and Robert (Alexander's East Indian manservant). On the same day that she sailed, Miss Schaw began her journal.

First sailing to the West Indies, the Schaw entourage stopped by the islands of St. Christopher and Antigua, where they were entertained by some of the first families of the islands. Alexander had received an appointment in the customs office of St. Christopher, but he obtained a leave from that position. From there they sailed to North Carolina.

Apparently Janet Schaw intended to return with her brother to St. Christopher after leaving the children with their father in North Carolina, although it is unlikely that she expected to remain in the islands any length of time. Landing first in Brunswick, she stayed in that town from 14 Feb. to 17 Mar. 1775. From there she went to Schawfield, the plantation of her elder brother Robert, which was located on the northwestern branch of the Cape Fear River, a few miles above Wilmington. She then journeyed to Wilmington and then to Point Pleasant, the plantation of Colonel James Innes, which was located on the northeastern branch of the river. Janet spent the remainder of her time in North Carolina visiting the last three places named. 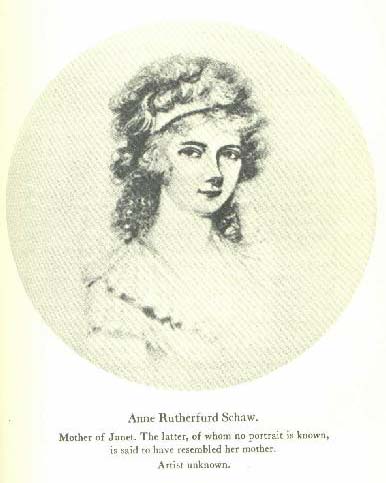 On 6 or 7 July her brother Alexander returned to England, having been persuaded by Governor Josiah Martin to carry his dispatches and inform Lord Dartmouth of the situation in North Carolina. Because of the worsening situation in the colony, Miss Schaw, Fanny, and the Rutherfurd boys went aboard the Cruizer, a British warship stationed in the Cape Fear. From there they boarded the George to cross the Atlantic. On 4 Dec. 1775 the party arrived in Portugal, where Janet remained until at least the middle of January 1776. Then she and the boys returned to Scotland aboard the George. There is no record of Miss Schaw's life after her return, other than that in 1778 she was living in "New Town," in the northern section of Edinburgh.

Janet Schaw was a most remarkable woman, and her Journal of a Lady of Quality gives an excellent Loyalist viewpoint of North Carolina just prior to the outbreak of the Revolution. The North Carolina Collection at the University of North Carolina at Chapel Hill has a contemporary manuscript copy of her journal.

Evangeline Andrews and Charles McLean Andrews, eds., Journal of a Lady of Quality; Being a Narrative of a Journey from Scotland to the West Indies, North Carolina, and Portugal, in the Years 1774 to 1776 (1923).

Schaw, Janet. 1801; Andrews, Evangeline (Walker); Andrews, Charles McLean. Journal of a lady of quality : being the narrative of a journey from Scotland to the West Indies, North Carolina, and Portugal, in the years 1774 to 1776. New Haven: Yale University Press. 1921. https://archive.org/details/journalofladyofq00schauoft (accessed May 7, 2014).

Schaw, Janet. 1801; Andrews, Evangeline (Walker); Andrews, Charles McLean. Journal of a lady of quality : being the narrative of a journey from Scotland to the West Indies, North Carolina, and Portugal, in the years 1774 to 1776. New Haven: Yale University Press. 1921. https://archive.org/details/journalofladyofq00schauoft (accessed May 7, 2014).