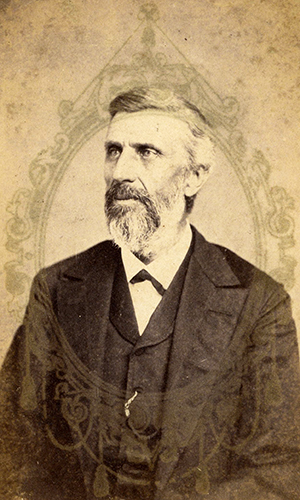 Albert Micajah Shipp, Methodist minister, university professor, college president, seminary dean, and church historian, was born in Stokes County, the son of John and Elizabeth Oglesby Shipp. He received an A.B. degree from The University of North Carolina in 1840. Later he was awarded an LL.D. from the university and a D.D. from Randolph-Macon College.

Shipp was licensed to preach in December 1840 and admitted to the South Carolina Conference of the Methodist Episcopal Church in 1841. He served pastorates in the Cokesbury Circuit, Charleston, Santee Circuit, Cheraw, and Fayetteville and for one year was presiding elder of the Lincolnton District. In 1848, when a throat infection left his voice too weak to pursue a pulpit ministry, he was named president of Greensboro Female College. In 1849 he became professor of history at The University of North Carolina, where he remained for nine years.

In 1858 Shipp was appointed president of Wofford College in Spartanburg, S.C., and remained in that post for sixteen years. From 1875 to 1885 he held the chair of exegetical theology at Vanderbilt University in Nashville, Tenn., three years of the time serving as dean of the theological department and vice-chancellor of the university. In 1885 he was at his own request superannuated by the South Carolina Conference.

Shipp was elected a delegate from the South Carolina Conference to each quadrennial General Conference of the Methodist Episcopal Church, South, from 1848 to 1886. His most notable literary achievement was The History of Methodism in South Carolina, requested by the conference in 1876 and finally published in 1883.

He married Mary Gillespie of Rose Hill Plantation in Marlboro County, S.C., and they reared a large family. Shipp died in Cleveland Springs, N.C., where he had gone for his health. He was buried in Gillespie Cemetery near Wallace, S.C.

Albert Micaja, Shipp, was my

Albert Micaja, Shipp, was my great grandfather his daughter Nannis, Nancy Shipp is believed to be the mother of my grandfather Thomas Shipp, Dawkins based on my AncstryDNA test. I have DNA matches for just about all of the Shipp ancestor surnames. I would love to meet my ancestors