John Sibley, physician, Indian agent, politician, and planter, was born at Sutton, Mass., the son of Timothy and Anne Waite Sibley. After studying medicine with Dr. John Wilson of Hopkinton, he served with the Continental troops in the Revolution as surgeon's mate. Settling at Great Barrington, Dr. Sibley in 1780 married Elizabeth Hopkins. Around 1784 he moved his family to Fayetteville, N.C., where he became an influential citizen as postmaster; editor of the Fayetteville Gazette, founded by him and Caleb D. Howard in 1789; and political figure. Sibley and Howard also served for some time as public printers for the state of North Carolina. Sibley's first wife died in 1790, and in 1791 he married Mrs. Mary White Winslow. His sons George C. and Samuel H. were born of the first union. 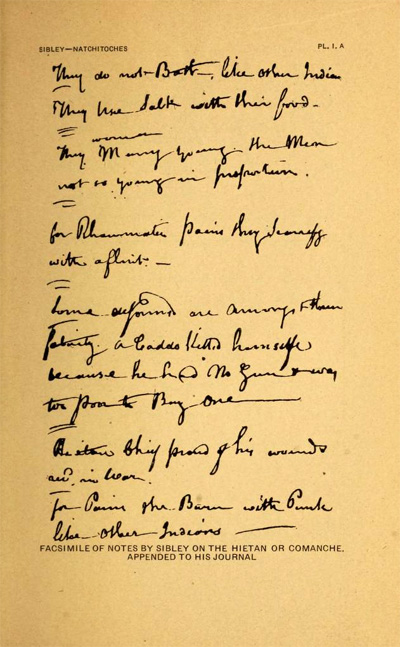 In the summer of 1802 Sibley was called on business to Natchez, Miss., and received from the Spanish government permission to travel extensively in the lower Mississippi region. He kept careful journals of his observations among the Indians of the region, notes on their languages, data on natural history, geography, and so on. By the end of 1803 extracts and reports from his travels had begun to reach the North Carolina Medical Society and various newspapers. By this time he had also become the object of interest of the U.S. government, which was anxious for any reliable information it could obtain on the territory that was being ceded by Spain to this country in the Louisiana Purchase. Sibley became acquainted with W. C. C. Claiborne, later governor of the Orleans Territory and, through him, with President Thomas Jefferson. By a letter of March 1804 he offered his services to Jefferson and was appointed surgeon to the U.S. troops at Natchitoches. In the following year he was named Indian agent for the Orleans Territory and in that-capacity visited most of the tribes in what is now Louisiana. He made extensive reports to Claiborne and Jefferson, compiling a vocabulary of the Caddo Indian tongue and two notable sketches of the ethnology and geography of the Red River and contiguous regions.

It seems evident that Sibley did not enjoy good relations with his second wife, who remained in Fayetteville until her death in 1811. She was the mother of Ann Eliza, a celebrated beauty who married U.S. Senator Josiah Stoddard Johnston of Louisiana and, after his death, a prominent Philadelphia attorney, Henry Duckworth Gilpin. Following the death of his second wife, Sibley in 1813 married Eudalie Malique of Louisiana. He lost his position as Indian agent for political reasons in 1814 but afterwards was a parish judge, served several terms in the Louisiana legislature, participated as a militia officer in Colonel James Long's raid on Texas in 1819, and became a member of the supreme council governing the military post at Macogdoches. Subsequently he retired to his plantation at Grande Ecore and concerned himself with the manufacture of salt, the planting of cotton, and other enterprises. He was survived at his death by children of all three of his marriages.