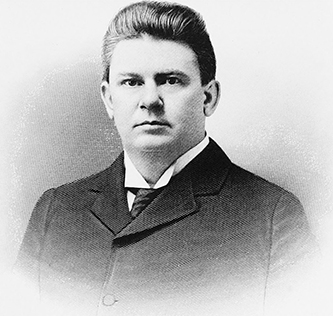 James Haywood Southgate, businessman and vice-presidential candidate, was born in Norfolk, Va., but lived in several localities before his parents settled in Durham, N.C. His father, James Southgate, was a native of King and Queen County, Va., and his mother, Delia Haywood Wynne, was from Louisburg, N.C. They both began their careers as teachers and school administrators, but James Southgate eventually turned to business and presumably his wife gave up pedagogy as well. Around the beginning of 1872 he became a life and fire insurance agent and opened an office in Hillsborough; in 1876 he moved his agency to Durham.

Young Southgate was the eldest of three daughters and three sons; only he among the sons survived infancy. After attending several schools, he entered The University of North Carolina for two years. He wished to become a physician, but after joining his father in the insurance business he decided to make that his career. The firm continued for at least a century under the name of J. Southgate and Son, Inc. On 6 Dec. 1882 Southgate married Kate Shepherd Fuller, the daughter of Bartholomew Fuller, a Durham lawyer. Only two of their four children survived infancy, and five years after Southgate's wife died in 1893, his young daughter died. His one surviving child, Thomas Fuller, went into business with his father and managed the agency after his death.

Southgate, a man of massive build, has been described by historian John Spencer Bassett, who knew him well, as a person of striking appearance, magnetic and commanding personality, and excellent voice. He also credited him with breadth of mind, a level head in crises, and balanced judgment. The success of Southgate's business and his extensive participation in other activities indicate that he was a person of prodigious industry with an intense interest in the welfare of others. For twenty-five years he held an official position in the Methodist Episcopal Church, South, and he was active in the YMCA and the North Carolina Sunday School Association. In 1895 he was appointed to the board of trustees of Trinity College, the Methodist institution that had recently been moved from Randolph County to Durham; he became chairman of the board in 1897 and held that position until his death nineteen years later. He also served as president or a board member of a number of local organizations committed to the betterment of Durham. For two terms he was president of the National Association of Insurance Agents.

Possessed of a genial personality and superior oratorical talent, Southgate became widely known as a public speaker. No doubt these assets contributed to his receiving the National party's nomination for vice-president in 1896. The National party was a faction that had bolted from the Prohibition party during its national convention in 1896 after a split developed over the platform; it opposed making Prohibition the sole issue in the campaign and broadened its platform to include more than a dozen other issues. Southgate's running mate for president was Charles E. Bentley of Nebraska. They polled fewer than 14,000 votes out of nearly 14,000,000 cast for candidates representing seven different political parties. Southgate had left the Democratic party in his mid-twenties for the Prohibitionists.

At age fifty-seven Southgate died at his country home, Southgate Cabin, of what his physician diagnosed as apoplexy. His body lay in state on Trinity College campus before it was interred in Maplewood Cemetery, Durham. In his eulogy of Southgate, Bishop John C. Kilgo, formerly president of Trinity College, said that for more than twenty years they had had the "most intimate friendship of soul and oneness of labors." As a tribute to Southgate, a strong advocate of the education of women, funds were raised for the James H. Southgate Memorial Building. This dormitory for women became the nucleus of the Woman's College of Duke University. Southgate's portrait was hung in the William R. Perkins Library among those of other trustees of Trinity and Duke.