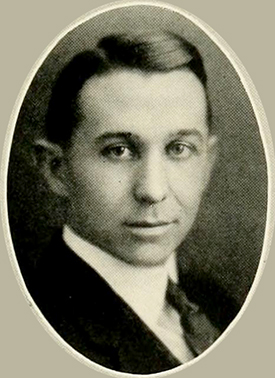 Richard Gordon Stockton, lawyer and bank executive, was born in Winston-Salem, the son of Madison Doughty and Martha Vaughn Stockton. He was graduated from Winston-Salem High School in 1907 and received a bachelor of arts degree from The University of North Carolina in 1911. After studying law at Columbia University for one year, he was admitted to the Forsyth County Bar in 1913. Stockton practiced law from 1913 to 1922 and taught at The University of North Carolina during the summers of 1914, 1915, and 1916.

When President Woodrow Wilson ran for a second term in 1916, Stockton served as chairman of the Forsyth County Democratic Committee. He enlisted as a private in the U.S. Army on 13 June 1917 and was discharged as a first lieutenant on 4 Apr. 1919 after serving in the Judge Advocate General's Office.

He served as a trustee of the Greensboro College for Women; president of the Methodist Children's Home, Inc., from 1941 until his death; and president of the North Carolina Foundation of Church-Related Colleges from 1956 to 1960, when he became chairman of the foundation's advisory board. During 1953 he was state treasurer of the Crusade for Freedom and president of the Carolinas United Red Feather Services.

Over the years Stockton was active in the Democratic party as well as in the Winston-Salem Rotary Club, the Kiwanis Club, the Forsyth Country Club, the Twin City Club, and the Old Town Club. A member of the Centenary Methodist Church, he served as chairman of the board of stewards.

He married Hortense Haughton Jones of Asheville on 13 Oct. 1917, and they had four children. Two of their children, Hortense Haughton Stockton and Richard Gordon Stockton Jr., died before the age of two. Two daughters, Sarah Elizabeth Stockton Hill and Jean Stockton Rhodes, lived into adulthood. Stockton died at age sixty-eight and was buried in Salem Cemetery, Winston-Salem. A portrait is available at the Winston-Salem Journal-Sentinel.