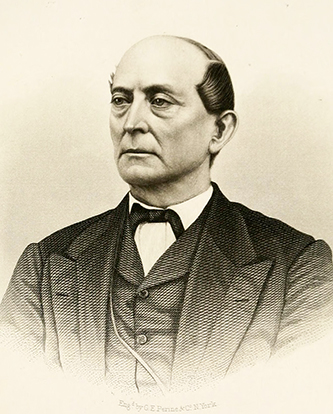 William Brickley Stokes, Tennessee political leader, was a native of Chatham County, the son of Sylvanus and Mary Christian Stokes. In 1818 Sylvanus, who owned extensive property in Tennessee, mounted an expedition to move his family west of the Blue Ridge. Tragedy struck, however, as Stokes was killed when his team bolted and ran away. His family settled in Smith County, Tenn., where William B. Stokes received a common school education. Later he became a DeKalb County planter and breeder of blooded horses. Ariel, his great stakes racer, won frequently and was a serious rival of Andrew Jackson's Truxton.

A Union Whig by predilection, Stokes was a member of the lower house of the Tennessee Assembly (1849–53) and of the state senate (1855–57) as a Know-Nothing after the demise of the national Whig party. Elected to the U.S. House of Representatives in 1858, he represented his district from 1859 to 1861. A staunch Unionist, he entered Federal service as a major of cavalry when the Civil War erupted. Subsequently, he was elected colonel of the Fifth Tennessee Cavalry (also known as the Middle Tennessee Cavalry). After the Battle of Murfreesboro, which secured Middle Tennessee for the United States, Stokes's regiment was garrisoned at Sparta. He was brevetted brigadier and major general before accepting an honorable discharge on 10 Mar. 1865.

Despite his military career, Stokes never abandoned politics. In 1864 he was a Lincoln-Johnson elector. He supported the wartime reconstruction of Tennessee and later became a Radical Republican noted for organizing black support for reunion on congressional terms. And he was a member of the U.S. House of Representatives in the Thirty-ninth, Fortieth, and Forty-first congresses (1866–71). In 1867 he was admitted to the Tennessee bar, established a legal practice in Alexandria, and unsuccessfully contested Parson Brownlow for a seat in the U.S. Senate. Two years later he was a candidate in a controversial gubernatorial race. The Radical Republicans split, with the extremists supporting Stokes and the moderates backing DeWitt C. Senter, a Brownlow associate. In a campaign that focused on the issue of universal suffrage for Confederate veterans, both candidates were motivated by ambition and personal animus. Stokes initially opposed enfranchisement but eventually became its advocate. Senter won by a substantial majority—slightly better than two to one. Defeated in 1870 as a candidate for a seat in the Forty-second Congress, Stokes claimed fraud but could offer no proof. In 1871 he was appointed Tennessee supervisor of the internal revenue system. This was his last public function, but he continued his legal practice until his death. He was active in the affairs of Post No. 16, Grand Army of the Republic, and the Free and Accepted Masons.

Stokes, William B. "Speech of Hon. W. B. Stokes, of Tennessee : on the election of speaker." Washington: Printed by L. Towers. 1861. https://archive.org/details/speechofhonwbsto00stok (accessed January 30, 2014).

Stokes, William B. "Speech of Hon. William B. Stokes, of Tennessee, on the state of the Union." Washington: Printed by L. Towers. 1861. https://archive.org/details/speechofhonwilli00stoka (accessed January 30, 2014).