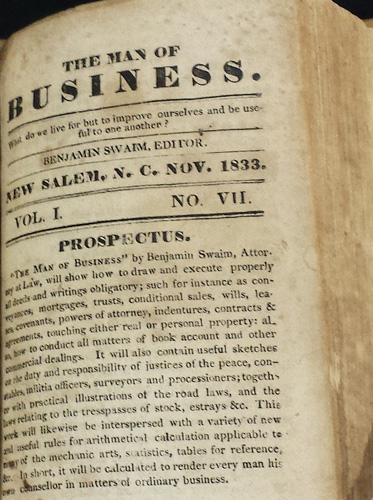 Benjamin Swaim, lawyer, printer, author, and newspaperman, was almost certainly the son of William (10 Mar. 1770–1 June 1850) and Elizabeth Sherwood Swaim (8 Nov. 1773–14 Aug. 1835). They and several other branches of the numerous Swaim clan were residents of the Timber Ridge Community, near Level Cross in Randolph County. Benjamin's early life and education are obscure, although he perhaps attended schools taught by his uncle Moses Swaim.

Benjamin Swaim first appears in the records of the North Carolina Manumission Society when, on 27 Aug. 1819, he attended the society's convention and began a sixteen-year association with the Abolitionist group. In the fall of 1822 he was hired to teach day classes at Mount Ephraim schoolhouse in Guilford County. Swaim, a law student at the time, was considered to be a teacher of great ability. The number of students attracted to this school was so large that an assistant teacher was needed, and his second cousin, William Swaim, was hired for the position. At the school Benjamin and William organized a debating club known as the Polemic Society, which became a forum for local men of all ages to join in oratorical contests. In 1823 Guilford County sheriff and state legislator Colonel William Dickey asked Benjamin to take over Dickey's private school. Swaim, intending instead to open a law practice, successfully recommended William for the job.

Swaim settled in the Randolph County town of New Salem, a crossroads community on the road between Asheboro and Greensboro. In 1827 he was elected president of the North Carolina Manumission Society, as well as a delegate from North Carolina to the national convention of the abolition society. Swaim's opinions on slavery are revealed in his 1829 "Report to the President," as printed in the Greensboro Patriot. In the report, he declared that "the hour of Negro Emancipation is fast approaching. It must and will assuredly come. And all that we can do is prepare for its approach by a timely and gradual improvement of their debased condition. . . . Aided by Divine assistance, we may fearlessly encounter all the opposition of our enemies and confidently stand forth, the advocates of truth and justice, with such unyielding firmness and determined purpose as no earthly interest, power or prejudice can successfully resist." Swaim was reelected president of the Manumission Society until its discontinuance in 1835.

Perhaps as early as May 1831, he began planning a serial law publication, The Man of Business; or, Every Man's Lawbook, a pioneer reference work of business law and legal forms. He called The Man of Business "new in character and design" and worried that those in the legal fraternity might protest the popularizing of the law. Though the work was "calculated to render every man his own counsellor in matters of ordinary business," Swaim stated that he was motivated by the desire "to improve the modes of doing business, and thereby render the ends of justice more easy and accessible to all classes of the community." He publicly appealed for the approbation of other lawyers, for "the prudent and seasonable prevention of ruinous litigation is no less a professional duty than the skillful management of it."

Benjamin's partner in this venture was his cousin William, editor of the Greensborough Patriot, who printed the first volume in 1833–34. However, the successful reception of The Man of Business, and the trouble involved in traveling repeatedly from his home to the printing office, led Swaim to open his own shop in October 1834. The New Salem operation, staffed by R. J. West, printer, and John Sherwood (a cousin), bookbinder, produced the second volume of The Man of Business in 1834–35.

Thereafter Swaim's legal career consisted mainly of writing and publishing form books and digests of North Carolina law. A proposed third volume of The Man of Business grew into his 540-page The North Carolina Justice, printed in Raleigh in 1839. This popular work "relating to the office and duty of a justice of the peace and other public officers" saw at least two posthumous editions revised and updated by other authors. In 1841 Swaim published at his office in Asheboro his The North Carolina Executor . . . a Safe Guide to Executors and Administrators in their practical management of Estates  . . .; in 1842 he wrote and published The North Carolina Road Law . . . with all the necessary forms and practical observations pertaining to the . . . responsibilities of overseers and road hands. His works were offered for sale in the catalogue of the Raleigh booksellers Turner and Hughes, and all were still in print at his death.

In February 1836 Swaim began editing and publishing a newspaper from his office in New Salem. Titled Southern Citizen, it had been proposed in November 1834 by William Swaim. William's prospectus lamented the low esteem in which southern newspapers were held; he sought to supersede his Patriot with a new "splendid, superfine" publication, "the largest and most useful family newspaper . . . devoted . . . to the interest, amusement, and edification of the American people." Within a year enough subscribers had been attracted to begin publication, but the untimely death of William Swaim in December 1835 threw these preparations into disarray. The Patriot continued to be published for the benefit of William's estate, while the Southern Citizen operation was taken over by Benjamin.

The Southern Citizen was of an uncompromising Whig political persuasion, promoting agriculture, internal improvements, universal education, and literature (its motto was, "What do we live for but to improve ourselves and be useful to one another?"). An unusual feature was the "Legal Department," subtitled "Ignorance of the Law Excuseth No Man." Here Swaim, obviously inspired by the success of The Man of Business, answered the questions of subscribers on various points of law.

In December 1836 he moved his newspaper, printing business, and law office to Asheboro, the Randolph County seat; there the Southern Citizen was issued weekly without interruption until April 1842, when publication was suspended. Either debt and financial instability or the recent death of Swaim's wife following the birth of a daughter may have contributed to the shutdown. Publication was resumed on 4 Oct. 1843 and continued until 17 Oct. 1844, when Swaim sold the newspaper and printing office to John Milton Sherwood. Whether the newspaper continued after that date is not known.

Benjamin Swaim's own publications cited in the text.

Swaim, Benjamin. 1846. The North Carolina justice containing a summary statement of the statutes and common law of this state, together with the decisions of the Supreme Court, and all the most approved forms and precedents relating to the office and duty of a justice of the peace, and other public officers, according to modern practice. Raleigh: H.D. Turner. https://www.worldcat.org/oclc/822973312, (accessed December 19, 2013).

Swaim, Benjamin. 1842. The North Carolina road law, now in force: containing all the acts of assembly and decisions of the Supreme Court on the subject of roads, ferries and bridges ; and interspersed with all the necessary forms and practical observations pertaining to the duties and responsiblities of overseers and road hands. Asheborough, N.C.: Printed at the "Southern Citizen" Office. https://www.worldcat.org/oclc/37745330, (accessed December 19, 2013).