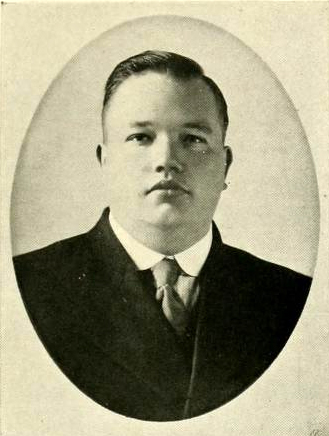 John Skally Terry, professor and friend of Thomas Wolfe, was born in Rockingham, the son of Jennie Skally and Edgar Burton Terry, both natives of Richmond County. His father was a merchant. Besides his older sister Bessie, he had three younger brothers: Edgar Burton, Jr., Harvey Stansill, and Charles Gibbons. He completed high school in Laurens, S.C., then for more than two years worked in railroad offices to earn college expenses, and in 1914 entered The University of North Carolina, where he participated in a wide range of extracurricular activities, including all the campus publications. His 270-pound physique prevented his engaging in athletics. In September 1916 he met freshman Thomas Wolfe at a meeting of the Dialectic Literary Society, took a special interest in him, and the following year solicited several youthful poems from Wolfe for the University Magazine. They were Wolfe's first published writing. Terry was graduated in 1918, returned to Chapel Hill for two years of medical school, and spent a seventh year at the university as a graduate student in English.

After receiving an M.A. in English from Columbia University in 1922, he was for twelve years associated with School, a weekly newspaper serving the New York City public school system, eventually becoming its editor. In 1925 he joined the Department of English at the Washington Square College of New York University and from then until his death taught English composition, biography, and creative writing, mostly in the evening college. Off and on, between 1924 and 1930, Wolfe also taught there. During 1928–29 Terry was one of the editors of the Children's Book Club. Meanwhile, he wrote and edited education monographs and contributed to professional journals.

In 1936 the artist Letterio Calapai suggested that he try his hand at watercolors, and his success and pleasure were such that he began studying art at New York University under Constant van de Wall. His work was exhibited in New York and Chapel Hill in 1939 and again in New York in 1943. On early sketching trips he often was accompanied by Wolfe, who lived near him in Brooklyn.

After Wolfe's death in 1938, Terry continued his friendship with the family and in 1943 wrote an introduction to and edited Thomas Wolfe's Letters to His Mother Julia Elizabeth Wolfe. Shortly before Mrs. Wolfe's death in 1945, she spoke to Terry's students in New York—an event that prompted him to organize the Thomas Wolfe Biography Club at the university. From reminiscences by Wolfe's friends at club meetings, Terry began to collect materials for a biography, but so inundated did he become in the data gathering that it is doubtful he would ever have completed the work, though he announced a month before he died that soon he would issue the first of four projected volumes. In Wolfe's The Web and the Rock (1939) Terry is satirically portrayed as Jerry Alsop. He was buried at Eastside Cemetery, Rockingham. He was a Methodist and a Democrat. His family donated his paintings to New York University and his books, papers, and the oil portrait by Constant van de Wall to The University of North Carolina.

International Who's Who Supplement (June 1949).