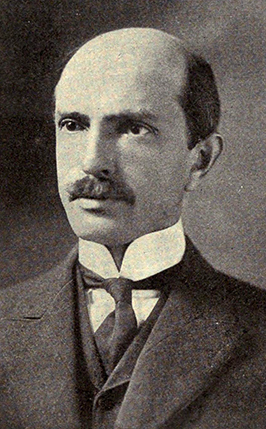 Charles Randolph Thomas, Jr., congressman, was born in Beaufort, Carteret County, the son of Emily Pitkin and Charles Randolph Thomas. He attended New Bern Academy and Emerson Institute, Washington, D.C., prior to his graduation from The University of North Carolina in 1881. He then studied law with his father and at the law school of Judges R. P. Dick and John H. Dillard in Greensboro. In 1882 he was admitted to the bar and commenced practice in New Bern. He was a member of the state House of Representatives in 1887 and the attorney for Craven County from 1890 to 1896.

In 1893 Thomas was named a trustee of The University of North Carolina, and in 1896 he was a member of the Democratic state executive committee and a presidential elector on the ticket of Bryan and Sewall. As a Democrat, he was elected to Congress in 1888 and served five terms between 4 Mar. 1889 and 3 Mar. 1911. In 1924 his party named him a delegate to its national convention in New York City. The following year, because of his wife's health, they moved to Waynesville but spent most of their winters in Norfolk, Va. Thomas gave many valuable books to the city library in Waynesville. In Norfolk he was a vestryman at Christ Episcopal Church.

Thomas's first wife, whom he married in 1887, was Laura Pasteur Davis, of Beaufort, the daughter of Major James C. Davis. Following her death on 30 May 1889 he married Mary Ruffin, the daughter of Judge Thomas Ruffin of Hillsborough. Thomas died in Norfolk and was buried in Cedar Grove Cemetery, New Bern. He was survived by two sons, Charles Randolph III, an engineer in Chicago, and Frank T., of Norfolk, and by three brothers, the Reverend Frederick D., the Reverend James A., and the Reverend John S. Thomas.