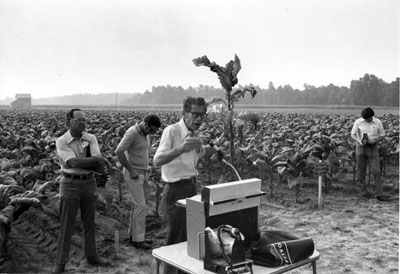 Furney Albert Todd, plant pathologist and broadcaster, was born in Wake County, the son of Willie D. and Mayne B. Todd. In 1943 he was graduated from North Carolina State College, where as a student he worked in the Plant Pathology Department laboratory. He entered graduate school but decided that he preferred to work with tobacco rather than continue to study. In 1945 he accepted a position with the U.S. Department of Agriculture as a tobacco pathologist at the McCullers Research Station south of Raleigh involved in plant bed disease control, breeding, rotation studies, and chemical soil treatment. In 1955 he took a newly created post as extension tobacco disease specialist at North Carolina State College and began an on-farm applied research program that became known as "Extension-Research on Wheels." In that position he developed a successful pest management program called R-6-P (Reduce Six Pests).

For a number of years Todd recorded a daily farm broadcast for the Tobacco Radio Network that was heard in South Carolina, Virginia, Georgia, Kentucky, and Florida, as well as North Carolina. He also appeared on a monthly farm show broadcast over WRAL-TV in Raleigh. In 1960 he visited Germany, Switzerland, and France to help tobacco growers combat widespread field outbreaks of blue mold and spent three weeks there assisting in planning control measures. In 1970 he was named "Man of the Year in Service to North Carolina Agriculture" by the Progressive Farmer magazine. Tobacco International magazine picked him as one of eight Men of the Year in 1977, and in 1978 he became one of the first two "Philip Morris Extension Specialists." In the latter year he also was named a Fellow in the American Phytopathological Society. Todd was the author or coauthor of more than six hundred scientific articles, extension bulletins, circulars, and leaflets.

He married Anne Liles of Zebulon, and they became the parents of Furney A., Jr., Richard, Anitra, Elizabeth, and Judy. A member of Wendell Baptist Church, Todd was buried at Greenmount Cemetery, Wendell.

Mr Furney, as we called him

Mr Furney, as we called him in the fields and in church, was the most honorable man you could have had the opportunity to meet. He truly cared about you as person and wanted to engage you in the effort to advance North Carolina and the world. Many years ago, I worked on his farm and was a member or his church. There are not enough words to say thank you for the encouragement and knowledge he gave freely to those he touched. Thank you, Mr. Furney. You changed everyone around you for the better.