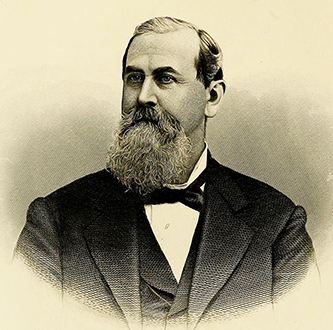 Rufus Sylvester Tucker, merchant and planter, was born in Raleigh, the third son of three children of Ruffin, a prominent merchant of his native Wake County, and Lucinda M. Sledge Tucker of Franklin County. Having received his preliminary education at the academy in Raleigh under the distinguished guidance of J. M. Lovejoy, he entered The University of North Carolina in 1844, receiving the A.B. degree in 1848 and the A.M. degree in 1868. On leaving the university in 1848, he entered his father's mercantile business, serving as a clerk until his father's death in 1851, at which time Tucker with his two brothers inherited the business.

On 23 Apr. 1861 he entered the Confederate army as a captain with an appointment by Governor John W. Ellis to be quartermaster and commissary for the Raleigh post. Resigning this position in the fall, he raised, captained, and mustered into service on 12 Feb. 1862 a company of North Carolina volunteers known as the Wake Rangers, Company I, Forty-first Regiment (or Third Cavalry). He served primarily in the eastern part of the state, where he received mention for distinguished gallantry in the Battle of Washington in September 1862. Shortly after this engagement he was promoted major but resigned on 20 December. The next year he accepted an appointment as assistant adjutant general, serving both General Daniel G. Fowle and his successor, Brigadier General R. C. Gatlin, until Tucker resigned in October 1863. November 1864 saw Major Tucker's election as principal clerk in the House of Commons for the 1864–65 session. Although he was suggested as a gubernatorial possibility in 1888, he never sought political office.

After the war he devoted himself to his mercantile business, expanding its operations until it became the leading dry goods house in the state. When in February 1883 Tucker retired from the business, its successful tradition was continued by his son-in-law, James Boylan, and his associates.

Having achieved success in business, Tucker turned largely to agriculture, profitably operating a valuable plantation in Pitt County while developing 540 acres in the Raleigh vicinity, known as Camp Mangum, into one of the finest farms in the state. His civic concern was evident in the gift of Tucker Hall, Raleigh's first public amusement building, dedicated by former Governor David L. Swain in 1867. Active in forming the Raleigh Chamber of Commerce, Tucker was chosen its first president in 1887.

His experience in managing the affairs of railroads, banks, and other institutions of a quasi-public nature was considerable. For more than thirty years he was a director of the Institution for the Deaf, Dumb and Blind at Raleigh, serving part of that time as its board president. He was a director of the North Carolina, Raleigh and Gaston, Raleigh and Augusta, and Carolina Central Railroads, in addition to being the largest private stockholder in the Atlantic and North Carolina Railroad. With his very considerable agricultural and real estate holdings, Tucker was reputed to be Raleigh's wealthiest citizen. He demonstrated a genuine enthusiasm for agricultural interests, munificent private hospitality, and humanitarian concerns.

Tucker died at his home in Raleigh, with funeral services in Christ Church, where he had been an active vestryman for more than twenty years. He was buried beside his parents in Oakwood Cemetery, Raleigh. Survivors were his widow, formerly Florence E. Perkins of Pitt County, whom he had married in 1856; five daughters, Bessie, Sarah, Minnie, Florence, and Margaret; and a son, William Ruffin.

Hello, I have photos of

Hello, I have photos of Bessie Tucker Fellowes & Lula Tucker..which are the children of Rufus Sylvester Tucker I believe..I found the photos in a antique store in Mooresville north carolina..someone had written names on the back of the photos so naturally i searched the internet and found info on Rufus Sylvester Tucker..very interesting man by the way..

My grandfather, Rufus Sylvester Tucker, was born in the late 1880s or early 1890s (i think) . He went to Yale University and graduated in 1911. He enlisted innthe army at some point after he graduated. on returning from the war, he met and married Harriet Nichols Tucker (from Fulton, NY.) whom he met while in NYC, having been introduced by Oscar (?) (who invented 'veal oscar' while working at the Waldorf). Harried was attending Barnard College. I do not believe that she had graduated. They married. Rufus and Harriet married and lived their adult married lives in Bethlehem, Pa. Rufus worked for th Bethlehem Steel Co. They had 4 children who lived (I believe that 2 othr children were still-born). The children were - Rufus Sylvester Tucker (born in Nov., 1920), Margaret Ann (Nancy) Tucker Stout (born in 7/7/22) , John Winder(?) Tucker (born in 1924) (John died at the age of 19 in June while attending The Westminster School in Simsbury, Ct). And William Ruffin Tucker (born 1926). ( These dates are all approx., except for my mother Nancy Tucker Stout.) Margaret Ann (Nancy) Tucker married Richard Ralston Stout from Ocean Grove, NJ ( a State Senator in NJ from 1952 -1972) on Jan. 18, 1947. They lived in Red Bank, NJ, then West Allenhurst, NJ. They had 6 children: Penelope Stout (11/27/47), Mary Elizabeth Stout (5/1/49), Margaret Tucker Stout (4/27/51), Richard Ralston Stout ( 2/13/54), Susan Nichols Stout (9/20/59) and Nancy Tucker Stout (11/24/62).
Penelope married Joseph (Jody) Robert Nachman (from Greenville, SC and NYC) on June 7, 1969 and had 2 children - Joseph R. (Jed) Nachman - born Sept. 19?) 1972? and William Stout Nachman - born May 1, 1975. Mary Elizabeth Stout married Stephen Mason Foehl (6/19/48 in NJ but from Williamstown, MA) in 1971 and had 2 children, Tucker Hamilton Foehl (9/21/75) and Margaret Mason Foehl (11/1/77). Margaret Tucker Stout married John Pogue (from Cinncinnati) and they had 3 children, Penelope Pogue, Elizabeth Lunkin Pogue, and Margaret Pogue. ( I would have to check the middle names.) Richard Ralston Stout married Lois Taylor (from Long Branch, NJ) in 1992. They had no children. Susan Nichols Stout never married, and had no children. Nancy Tucker Stout married Andrew Taylor from Rockford, Il. And they have a daughter, Samantha Tucker Taylor.
Rufus Sylvester Tucker Jr never married. John Winder Tuck died at age 19 with no family and William Ruffin Tucker married (2nd marriage) Carol Exnatius (sp?) Tucker and they had 3 children - Michael Tucker, Marshall Tucker, and Elinor Tucker. The only children from these 3 are a son and daughter for Marshall and Sylvie Tucker- Christopher and Caroline. I have a lot more information but have just passed along a portion of my family tree. If someone is keeping track of all of this and needs more info from me, please contact me