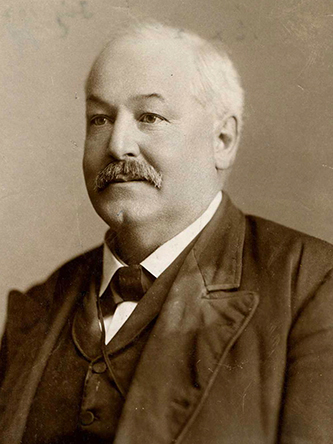 Daniel Gould Fowle, lawyer, state legislator, judge, and governor, was a descendant of George Fowle, who emigrated from England to Concord, Mass., in 1638. Daniel G. Fowle was born in Washington, N.C., the fourth of ten children of Samuel Richardson Fowle, who had moved to Washington from Massachusetts in 1815, and Martha Barney Marsh Fowle. As a boy, young Fowle enjoyed the water sports of swimming, sailing, and fishing on the Pamlico River but was a studious sort as well. At fourteen, he entered the school of William J. Bingham in Orange County. He later attended Princeton where he was a member of the literary society and a junior orator. He was graduated in 1851, and went on to study law under Judge Richmond M. Pearson. After being admitted to the bar in 1853, he settled in Raleigh and practiced law.

From the onset of the dispute between North and South, Fowle opposed secession. Nevertheless, at the beginning of the Civil War he volunteered as a private in the Confederate Army. He became a member of the Raleigh Rifles Company and soon afterwards a second lieutenant. He was appointed major of the commissary branch of the state military department but resigned the post in order to help raise the Thirty-first Regiment. Captured on Roanoke Island by General Ambrose Burnside, he was for a short time a prisoner of war. In October 1862, Fowle was elected to serve in the state legislature from Wake County. When this session adjourned, he was appointed adjutant general of North Carolina. He was promoted to the rank of major general by Governor Zebulon B. Vance but resigned in 1863.

In 1864, Fowle was reelected to serve in the state legislature. The following year Governor W. W. Holden appointed him judge of the superior court. Although the North Carolina legislature of 1865–66 elected him to this office for life, he stepped down instead of being forced to carry out the orders of the military commander of North Carolina and South Carolina during Reconstruction. After being defeated as a Democratic candidate for the convention of 1867, he was named chairman of the North Carolina Democratic Committee of 1868. Because of his hard work during the election, he was considered for the position of attorney general of the United States. In 1880, Fowle entered the North Carolina governor's race but was defeated by Thomas Jordan Jarvis. Four years later he was defeated by W. R. Cox in a bid for the Democratic nomination for the United States Congress. However, members of the 1884–85 Democratic legislature petitioned President Grover Cleveland to appoint him solicitor general. 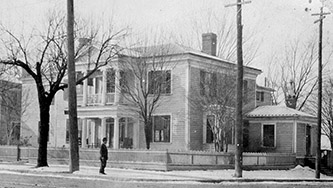 In 1888, Fowle was nominated for governor by the so-called "Liberal Democrats" and won the election. When inaugurated on 17 Jan. 1889, it was raining and the ceremonies had to be held in Stronarch's Warehouse. Fowle was the first governor to live in the present governor's mansion. Upon taking office, he and his family moved into the then unfinished Executive Mansion in Raleigh. The governor brought his own furniture with him, filing a careful list with the state treasurer's office in order to keep a record of who owned what. Soon after assuming his duties as chief executive, he held a reception for legislators and other government officials. With this first social function in the mansion, a tradition was set for future governors to entertain returning and newly elected legislators. As governor, Fowle created and presided over a railroad commission that would protect the railroad interests as well as the people of the state against any abuse of power; recommended a tax levy in areas which found it difficult to comply with the four-month minimum school year; and advocated the establishment of a university as well as some form of higher education for women, devoting a portion of the 1891 address to the General Assembly to the matter.

Fowle was married in 1856 to Ellen Brent Pearson, the daughter of Judge Richmond M. Pearson under whom Fowle had studied law. She died in 1862 leaving two daughters, Margaret and Martha. In 1867, he married Mary E. Haywood, the daughter of Dr. Fabius and Mary Helen Haywood of Raleigh. Four children were born to them: Helen, Mary, Daniel G., Jr., and Fabius Haywood who was killed in a hunting accident as a boy. Governor Fowle was a Presbyterian. He died in office and was buried in Oakwood Cemetery, Raleigh. His portrait hangs in the grand entrance hall of the Executive Mansion.