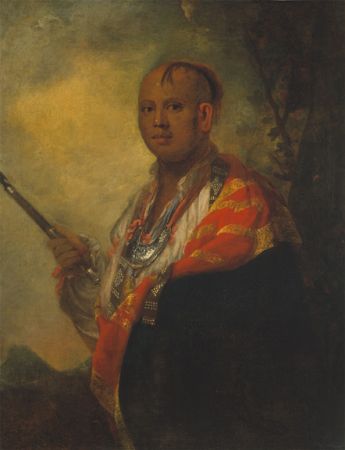 Usteneka, Cherokee leader, is referred to in some sources as Ostenaco, Autositty, Ustonekka, Outacite, Outacity, and Judd's Friend. There seems to be no substantial agreement among sources as to whether these names all refer to the same man or to several different men. The confusion is complicated by the caption under a contemporary print of Sir Joshua Reynolds's portrait of three Cherokee Indians that lists two of the men as "Outacite or Man-Killer; who sets up the War Whoop" and "Austenace, or King, a great warrior." Outacite is Cherokee for "Mankiller," a title of respect.

Usteneka was a prominent leader of the Overhill Cherokee who lived in far western North Carolina (now eastern Tennessee) during the eighteenth century and figured in several treaties and conferences with the North Carolina, South Carolina, and Virginia governments as well as in the Cherokee War of 1760–61. He may have been the chief of the Cherokee town of Tomotley and was probably second in command of the Overhill tribes, which were under Ouconnostotah after 1760. He was also a contemporary of the better-known North Carolina Cherokee, Attakullakulla.

Usteneka's name first appears in the white settlers' history as a member of various delegations to show the Cherokee's desire to continue trade relations with the British and pledge allegiance to King George II during the French and Indian Wars. Two such trips were recorded to Charles Town before 1758. There is also evidence that Usteneka led a band of eighty Indians into Virginia at the request of that colony's representative, Edward Guest, in an expedition against warring Shawnees. Despite the efforts of some Cherokee, particularly Attakullakulla, and some British officials, relations between the two groups were severely strained by the fall of 1759. In one incident, a delegation of Cherokee was forced to go all the way to Charles Town to demand ammunition that had been promised them. The British, fearful of supplying gunpowder to potential enemies, had assumed that they would not make the long trip. Usteneka is listed as one of this expedition of Indians. At one point during the journey Usteneka left, and it was suggested that he was arranging for an ambush of the British Indian agent, but this is doubtful as the ambush never occurred. Relations with the Cherokee continued to break down until the British found themselves engaged in serious warfare in 1760 and 1761, referred to as the Cherokee War. On 26 Sept. 1759 Usteneka and Ouconnostotah raised the British flag at Nucassee Town, a Cherokee village, and sent a peace delegation to William Bull, South Carolina's Indian representative. The Indians' demand for complete destruction of Fort Prince George was not acceptable to the South Carolina government, and a final peace was not arranged until a year later.

In early 1760 Usteneka was influential in getting Kanagataucko chosen "emporor" or head of all the Cherokee, despite Attakullakulla's known desire for the position. At this time Usteneka was made second in command of the Overhill Indians. In 1761 he and seventy other Cherokee went to Williamsburg, Va. While there, Usteneka pled with the British authorities to be taken to England, a sign of high prestige among the Cherokee; he finally went with two other warriors. Unfortunately for the Indians, their interpreter died during the voyage. But the language barrier did not prevent Usteneka from dining with Henry Ellis, meeting Oliver Goldsmith, having his portrait painted by Sir Joshua Reynolds, being received at court, or returning home in November 1762 thoroughly pro-British.

Usteneka is mentioned as a Cherokee warrior again in 1764, when he agreed to help the English in their conflict against Pontiac and the Creeks. He led an unsuccessful expedition to capture a large French convoy of supplies to Pontiac but was rewarded £900 for the capture of two French planters. Usteneka is noted as a peacemaker and spokesman for the British in the various conflicts between the "cracker" settlers and the Indians that occurred in the years following the French and Indian War. In 1768 he was a signer of the important Hard Labor Boundary agreement, instigated by the Cherokee and surveyed and arranged by Governor William Tryon. This treaty set a line from the Reedy River in South Carolina to Chiswell's Lead Mine (near present-day Wytheville, Va.) as the furthest point white settlement could be allowed, in accordance with the Proclamation of 1763. The last mention of Usteneka is as a Cherokee representative to another meeting, held with the white settlers in January 1769 at Charles Town.

I believe that my family by

I believe that my family by the name of Tomberlin married an Indian related to the chief of one tribe in North Carolina.