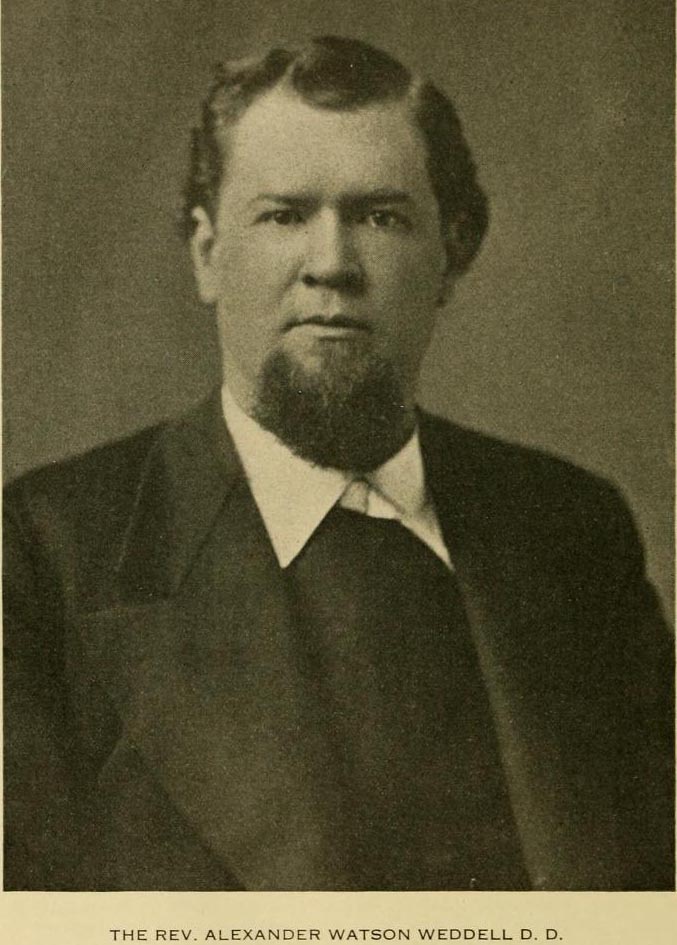 Weddell and several of his brothers emigrated to North Carolina from Musselburgh, Scotland, near Edinburgh, and he became president of the Tarboro branch of the State Bank of North Carolina. Margaret Ward Weddell was a native of Edgecombe County. Their son, Alexander, was named for a family friend, Alexander Watson, who had accompanied the Weddell brothers to North Carolina; Watson was a merchant in Nashville before relocating in New York City. About 1854 James Weddell and his family moved to Petersburg, Va., where Alexander attended a private academy conducted by the historian Charles Campbell. After several years at Hampden-Sydney College, he studied law at the University of Virginia in 1860–61. Young Weddell left the university to join the Confederate army as a lieutenant. Wounded in June 1862, he was invalided out of the service and for the remainder of the war was private secretary to Judah P. Benjamin, Confederate secretary of state.

Returning to Petersburg, Weddell was both editor of a local newspaper and a lawyer. Deciding to enter the Episcopal ministry, he attended the Virginia Theological Seminary, and after his ordination in 1871 he was assigned to Emmanuel Church, Harrisonburg, Va. In 1875 he was called to historic St. John's Church, Richmond, a charge he continued to hold until his death. He was buried in front of the main entrance to the church. In 1942 his son, Alexander, presented a bronze plaque in memory of his father and his father's two brothers, John Archibald and Virginius Loraine Weddell, who had died in the Confederate army. This tablet, which contained the "Prayer before the study of law" written by Samuel Johnson in 1765, was placed at the entrance of the first-year law room in Clark Hall at the University of Virginia.

On 31 Jan. 1866, in North Carolina, Weddell married Penelope Margaret Wright, the daughter of Dr. David Minton Wright of Chowan County and Norfolk, Va. They had three sons, James, William, and Alexander, and three daughters, Margaret, Penelope, and Elizabeth. A son, Alexander Wilbourne Weddell, became U.S. ambassador to Spain and to Argentina; he bought Warwick Priory in England and reconstructed the house in Richmond in 1925. After he and his wife died, the residence—named Virginia House—and a large endowment were left to the Virginia Historical Society. Elizabeth Wright Weddell, the daughter of the Reverend Mr. Weddell, was the author of a history of St. Paul's Church, Richmond.