Sidney Weller, physician, nurseryman, clergyman, and planter, was born in Crawford, Orange County (then the town of Montgomery in Ulster County), N.Y., the eldest of seven children of Hendrick (Henry) and Ann Kidd Weller. They were of a German Palatine family that had settled in the colony of New York in 1709. There seems to be no record of Sidney's early life, but he clearly was well educated and, inasmuch as other members of the Weller family were baptized in the Goodwill Presbyterian Church in Montgomery, he probably was as well. On 14 Aug. 1813, however, he was admitted to Graham's Associate Reformed Church in Montgomery and described as a teacher. At one time, when he resided in Crawford, he was identified as a minister. He witnessed a will in Montgomery, N.Y., on 1 May 1811. In the 1820s Weller moved to Halifax County, N.C., and in the community of Brinkleyville acquired a 400-acre farm on very poor-quality land for which he paid $1.50 an acre. He intended to demonstrate how the soil could be improved and the land made productive. 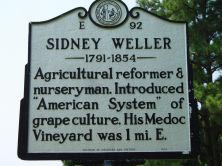 On 6 July 1820 Weller married twenty-year-old Laura Maria Meachan. She died childless on 17 June 1826. On 16 Sept. 1828 twenty-five-year-old Elizabeth McCarrel became his second wife, and they had nine children: Mirzah (or Mercer) Leander, John Henry, Mary Ann, Sarah Adelia, Jane Elizabeth, Irene, Joseph McCarrel, Howard William, and Laura Addie. Mirzah Leander was killed in the Battle of Shiloh, Miss., on 6 Apr. 1862; Joseph McCarrel enlisted in the Seventeenth Regiment of North Carolina Troops in May 1861 but was discharged the next year because of disability.

About the time Weller arrived in North Carolina agriculture was in a decline. Soil fertility was becoming exhausted, and hundreds of families were leaving the state to settle in newly opened regions in the South and South-west, notably Alabama, Mississippi, and Louisiana. Weller set about to publicize his ideas for reform, and instead of becoming a planter he engaged in general farming, grew grapes, and operated a small nursery. He also planted and propagated mulberry trees in a plan to make the South a region of silk production. In a six-year period he reported having sold $10,000 worth of mulberry trees that he produced in his nursery. He advocated and demonstrated methods for improving the fertility of the soil through the use of livestock manure and other natural fertilizers, rotating crops, and cover crops to prevent erosion.

He wrote for agricultural journals in North Carolina and elsewhere and for DeBow's Commercial Review in New Orleans, spoke before agricultural societies, and advocated the growing of grapes for the production of wine. He pointed out the qualities of native grapes, particularly the scuppernong, which he may have been the first to describe. After experimenting with over a hundred varieties of grapes, he settled on twenty-six that he considered suitable for the South. By making grafts and propagating cuttings, he improved a wild grape that was given his name and that of his county—Weller's Halifax. His Medoc Vineyard in western Halifax and his commercial winery attracted attention even outside the state. In 1840 North Carolina was the leading wine-producing state in the nation. After his death his vineyard was acquired by the neighboring Garrett brothers, Charles and F.M. From Weller they had become familiar with the business and in time moved it to New York and California as pioneer producers of wine.

In addition to offering grape vines and mulberry trees, Weller's nursery stocked strawberries, vegetable seeds, a variety of fruit trees, and ornamental shrubs. Artichoke and okra were in particular demand at one time, and okra seed were recommended as a substitute for coffee. Packed in damp sawdust or moss, his plants could be shipped as far as New Orleans and St. Louis.

Weller was generous in sharing his knowledge, and he published practical articles on many related subjects. As a further means of encouraging improved agriculture, he played a leading role in creating the State Agricultural Society and in organizing the first North Carolina State Fair in 1853.

Little appears to be known of Weller's roles as clergyman and physician, but one of his publications in 1845 referred to him as "Reverend" and the Tarboro newspaper in 1847 called him "Dr. Weller." Nevertheless, he may have abandoned both professions when he moved to North Carolina. He was a frequent contributor to regional newspapers not only on agriculture, but also on theology and politics. As an active candidate for election to Congress in 1847 as a Whig, he attracted considerable attention but withdrew before the election.