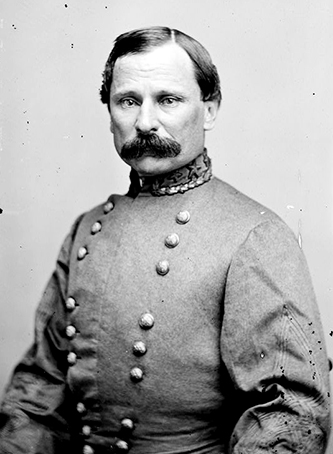 Cadmus Marcellus Wilcox, Confederate soldier, was born in Wayne County, the second of four children of Reuben, a native of Connecticut, and Sarah Garland Wilcox, a noted North Carolina beauty. His parents moved to Tipton County, Tenn., where he grew up. After attending the University of Nashville, he entered the U.S. Military Academy and was graduated in 1846. During the Mexican War he served under both Zachary Taylor and Winfield Scott, distinguishing himself at Chapultepec, where he led the storming party. Appointed aide to General John A. Quitman he was brevetted first lieutenant for his gallantry. He served in Florida before becoming assistant instructor of infantry tactics at West Point from 1852 to 1857. His failing health caused him to secure a year's leave for travel in Europe. In 1859 he published Rifles and Rifle Practice and a year later translated a French work on Austrian evolutions of the line.

Commissioned captain on 20 Dec. 1860, Wilcox was in New Mexico when the Civil War began. When Tennessee seceded, he reluctantly resigned his commission on 8 June 1861, accepting the colonelcy of the Ninth Alabama Infantry. He fought with the regiment at First Manassas. Promoted to brigadier general on 21 Oct. 1861 and to major general in January 1864 to rank from 3 Aug. 1863, he served with the Army of Northern Virginia until Appomattox.

A steady but unspectacular commander, Wilcox established a record as a reliable officer. During the Seven Days' campaign his brigade sustained casualties amounting to 56 percent. His defense of the army's right at Salem Church during the Chancellorsville campaign was notable, and his unsupported attack on 2 July 1863 at Gettysburg which carried to the crest of Cemetery Ridge became one of the great "ifs" of the war. His stubborn defense of Fort Gregg at Petersburg on 2 Apr. 1865 enabled Lee's army to cover its withdrawal and move westward towards Appomattox.

A lifelong bachelor, Wilcox moved after the war to Washington, D.C., where he lived with the widow and two children of his older brother, a Texas congressman who died during the war. He declined offers for commissions in the Egyptian and Korean armies, refusing to leave his adopted family. In 1886 President Grover Cleveland appointed him chief of the railroad division of the General Land Office, a position he retained until his death. Wilcox wrote a History of the Mexican War, which his niece, Mary Rachel Wilcox, edited and published post-humously (1892). At his funeral, four pallbearers were former general officers of the U.S. Army and four were former Confederate generals. Wilcox was buried in Oak Hill Cemetery, Washington, D.C.

I'm a decedent of Cadmission

I'm a decedent of Cadmission Wilcox ; does he have any living relatives ? Also, do people visit his home place ?