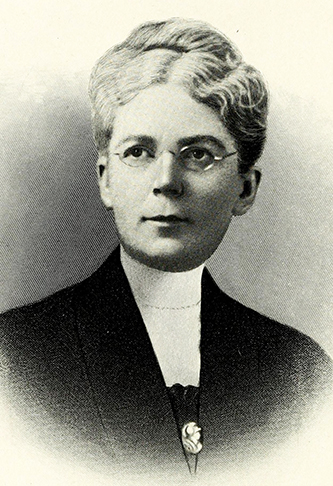 Laura Annie Ballinger Winston, temperance leader and educator of the deaf, was born at Swinton Lodge in Guilford County, the daughter of Yancey and Naomi Coffin Ballinger. Her father was of a line of French Huguenots who settled in South Carolina seeking religious freedom. Her mother was of the noted Coffin family line of Devonshire, England, which immigrated to Massachusetts in 1642. The Coffins were Friends (Quakers) and subsequently settled on the island of Nantucket, from which future lines moved to Guilford County, N.C.

She studied under her parents before entering the New Garden Boarding School (later Guilford College), where she was a student for seven years (1862–69). In 1869 she went to Raleigh to teach in the state school for the deaf. Demonstrating an unusual facility for working with the deaf, she was regarded as a dedicated and successful teacher. In 1872 she married Alonzo Hinton Winston of Raleigh. They had one daughter, Lonnie, born in 1873. Alonzo died five days after their daughter's birth, and his widow never remarried.

For about five years after her husband's death, Mrs. Winston served in a missionary field in Mexico. There, at the Hussey Institute in Matamoras, she was associated with her sister, Julia L. Ballinger, a longtime principal and teacher of that missionary school for Mexican girls. The school was a project of the Friends' Board of Missions of Philadelphia. About 1890 Mrs. Winston and her daughter returned to North Carolina, and within a few months the daughter died. It was then that Mrs. Winston said: "I'll try to live for somebody else's daughter."

When the State School for the Deaf was built in Morganton in 1894, she was invited to resume teaching deaf children and accepted what became a brilliant and enduring lifework. Her instruction of subject matter was considered spectacular, but her emphasis on religion and character-building was recorded as phenomenal. Initially Mrs. Winston was a supervising teacher in the sign department. Within three years, in 1897, the school's board of directors named her lady principal with full responsibility for the institution's educational program as well as social relationships. Among the latter she edited the school paper, the Deaf Carolinian. Reviewers praised her journalism, and the paper's circulation increased beyond any previous record. She also wrote instructive articles on various subjects, especially religion, temperance, and travel, and received wide recognition for her series on "My Trip to Palestine and the Holy Land." One of her professional papers, "How to Encourage the Use of English outside the Schoolroom," written for the Teachers' Association in 1904, brought a request for copies to be distributed in schools abroad.

In 1904 Mrs. Winston went to Jerusalem as a delegate from North Carolina to the World's Sunday School Convention, of which she was elected first vice-president, presiding over several sessions of a gathering that drew representatives from twenty-six nations.

As early as 1883 she participated in the first state convention of the Woman's Christian Temperance Union, serving as recording secretary. Active in the organization for over thirty-eight years, she was an effective promoter of temperature legislation that resulted in special instruction on the subject in the public schools. From time to time she was state president, state organizer, and a delegate to state and national conventions and to the World's Convention of the temperance union held in Edinburgh in 1900. Among her activities were lectures on temperance before various groups in North Carolina and adjacent states, cottage meetings and Bible readings, and special conferences with parents.

Mrs. Winston never allowed her work for temperance to supplant the principal mission of her life: teaching the deaf. She resisted many offers to go into the field—among them, invitations to teach in schools in China and Europe. She continued to travel widely and shared that enrichment with her pupils first and then with many groups around the state, especially churches and schools. From her early youth she was a devout Friend (Quaker) and ministered in many places and in many ways.

In early 1912, after a seventeen-year association with the school at Morganton, Mrs. Winston retired from teaching, but she continued her temperance work and other projects that had drawn her interest. She died at her home in Greensboro following a brief illness and was interred in a Greensboro cemetery.