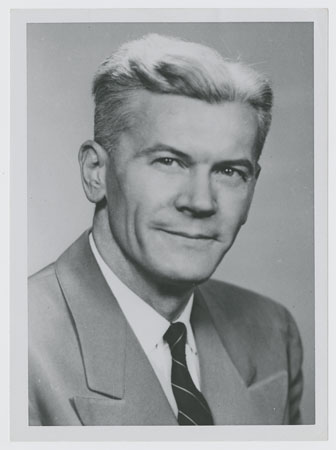 Richard Knox Young, clergyman and pioneer in pastoral care for the ill, was born on a farm in Person County, the son of Ernest Moore and Ethel Pugh Young. He became ill as an infant, and the family physician said that he would not live. His mother prayed for him, asking that he be spared and offering his life to the glory of God. As a youth Young felt a call to the Christian ministry but ignored it. The sense of being called persisted, yet he switched from job to job.

Finally, in 1941, at age twenty-eight, he entered Wake Forest College, graduating in 1943. From the Southern Baptist Theological Seminary in Louisville, Ky., he received a bachelor of divinity degree in 1946; he was ordained a Baptist minister in 1947 and earned a doctor of theology degree in 1952. To further prepare himself for the goal he had in mind, in the summer of 1945 he spent twelve weeks in a mental hospital in Elgin, Ill. He ate and slept on a ward with the patients and learned more about humanity in those few months, he said, than a lifetime at seminary would have taught.

Following his graduation from seminary, Young was invited to become chaplain at the Baptist Hospital in Winston-Salem, operated in conjunction with the Bowman Gray School of Medicine of Wake Forest College. From 1946 to 1970 he was director of the school of pastoral care at the hospital. The first session of a new program began in 1947, and within a few years more than 1,700 students representing thirty-six denominations and twenty-five foreign countries had been trained in the care of the sick. As of 1994, more than 3,000 persons, representing thirty-nine denominations from as many countries, had studied chaplaincy and pastoral work in the program begun by Richard Young. He served as the first professor of pastoral care at the Southeastern Baptist Theological Seminary in Wake Forest, N.C., and as professor of pastoral care at Wake Forest College (later Wake Forest University) in Winston-Salem.

Physicians and nurses came to appreciate Chaplain Young's success with the ill, and he became the first clergyman invited to address the American Medical Association. In time he was called upon to lecture to ministers, students, physicians, nurses, and others, not only in the United States but in several foreign countries as well. His work became well known after an article in Reader's Digest was published in 1959. As a result of this article, the U.S. Air Force established a contract with Wake Forest College's Department of Pastoral Care to train chaplains.

In 1962 chronic depression overcame Young, and two months of psychiatric observation and treatment followed. His friends and the community at large responded to his illness in the manner that he had been teaching. In May 1970 he retired from the medical school but continued to write as well as to teach at North Carolina Memorial Hospital at The University of North Carolina. After a year he moved to his birthplace, Roxboro, where he engaged in pastoral counseling and was an interim pastor.

He was the author of The Pastor's Hospital Ministry (1954) and Spiritual Therapy: How the Physician, Psychiatrist, and Minister Collaborate in Healing (1960), for which Albert L. Meiburg assisted in collecting information. Married to Mary Frances Vickers of Atlanta on 13 Nov. 1935, they had a daughter and two sons: Vickie, Richard, Jr., and David. Young died in Roxboro at age sixty-one and was buried in the cemetery at Providence Baptist Church north of the city.