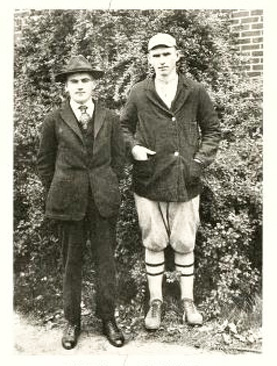 Jonathan Thompson Walton Zachary, professional baseball player, was born in Graham, one of eight children of Alfred, a farmer, and Mary Guthrie Zachary. He was educated at Springs School and Guilford College, where he was a standout baseball, football, and basketball player. Under his leadership Guilford's 1917 baseball team won 12 of 13 games and claimed the unofficial state championship.

Zachary was the rare player who never competed in the minor leagues. He made his major league debut in 1918 with the Philadelphia Athletics. He pitched two games under the name Zach Walton, winning one with one no-decision. The same year he volunteered for relief work in France through the American Friends Service Committee. He served with the American Red Cross in France through the end of the war and into 1919.

After returning from France, Zachary signed with the Washington Senators. From this point until 1936 he pitched in the major leagues. He played for seven major league teams in nineteen years, winning ten or more games in eleven of these seasons. It was Zachary's misfortune to spend much of the time playing for second-division teams. When given the chance to pitch for better teams, he frequently compiled impressive records. For the Washington Senators he won eighteen games in 1921 and fifteen games in 1922 and 1924. In the latter year his earned run average was second in the American League only to future Hall-of-Famer and Senators teammate Walter Johnson. This combination carried Washington into the World Series against the New York Giants in 1924. Zachary was the star of the Series, leading Washington to victory by winning game two 4–3 and game six 2–1. He slumped to 12–15 in 1925 and made only a brief relief appearance in the World Series of that year. In 1927, while pitching for the Senators, Zachary gave up Babe Ruth's famous sixtieth home run. This brought Zachary some notoriety for the rest of his life and tended to obscure his other accomplishments. Ironically, Zachary was traded to the New York Yankees in 1928. He played in his last World Series that year and won one Series game for the victorious Yankees. The next year he won twelve games without a loss for the second-place Yankees. In the 1980s this remained the major league record for most wins without a loss in a single season. He was traded in 1930 to the Boston Braves and finished his career in the National League, mostly with losing teams. He retired after the 1936 season, at age forty.

After his retirement from baseball Zachary returned to Alamance County, where he grew tobacco and invested in real estate. He married Etta McBane of Asheville on 16 Jan. 1931. They had two children: Tom, Jr., and Sally. Zachary died at Alamance County Hospital and was buried in Alamance Memorial Park, Burlington. He was inducted into the North Carolina Sports Hall of Fame.