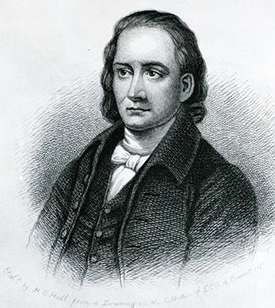 The imminent invasion of North Carolina following the British Revolutionary War victory at Camden, S.C., on 16 Aug. 1780 precipitated a crisis in the state government. Governor Abner Nash asked the General Assembly to create a "council" to assist in the conduct of the war. On 13 September, just before adjourning, the legislature named five of its members to a Board of War, which would remain constantly in session with broad authority to direct military affairs, such as mobilizing troops and procuring and delivering provisions and military supplies to state and Continental forces.

Nash, who had returned to his home on the Trent River above New Bern following the adjournment of the Assembly, complained that the Board of War infringed upon his executive authority. When the Assembly reconvened at Halifax in late January 1781, he suggested that the board's creation had subverted the state constitution and deprived him of rightful powers. Nash threatened to resign unless the legislature restored his lawful authority. Lawmakers assured Nash that if it was necessary to retain the Board of War, its powers would be defined to avoid conflict with the governor. Before adjourning, they created a three-member Council Extraordinary and empowered the governor with the concurrence of the council to exercise the emergency powers formerly vested in the Board of War.

The four and a half months that the Board of War directed the state's military affairs constituted a period of crisis. Board members corresponded with commanders of the Continental forces in North Carolina and South Carolina and with Governor Thomas Jefferson of Virginia, directing the movement of men and supplies. On at least 11 occasions they sent letters to Nash at his residence near New Bern, reporting their actions, forwarding correspondence from the military officers, and requesting the governor's attention to specific needs. The Battle of King's Mountain on 7 Oct. 1780, the Battle of Cowpens on 17 Jan. 1781, and the food, clothing, and military supply demands of Nathanael Greene's army operating in the Carolinas strained the state's meager resources.