Brick-making techniques were introduced in North Carolina from northern colonies, especially from Jamestown, Va., when settlers began to locate along the Albemarle coastal area in the 1660s. The abundant supply of clay and oyster shells necessary to make lime mortar enabled wealthier settlers to build brick houses in North Carolina before 1700. James Long's will, dated 15 Nov. 1711 and probated in Chowan County, listed in it "the brick house plantation." John Lawson, the surveyor general for the colonial government, wrote a report in 1714 stating that in the region "good bricks and tiles are made and several sorts of useful Earths as Boles, Fuller's-Earth, Oakers and Tobacco-pipe Clay [are found] in great plenty."

Bricks were made during the 1700s in more than a dozen North Carolina counties. Examples of early brick structures include the Newbold-White House, Perquimans County (about 1730); St. Thomas Church, Bath (1734); and Tryon Palace, New Bern (1767-70). Early methods of making bricks by hand involved packing locally found clay into dampened cedar wood mold boxes, the insides of which were sanded to give the brick texture and releasing qualities. Radical changes in brick making occurred in the last half of the nineteenth century with the development of extrusion machines using "star" cutters to end-cut brick. These cutters could cut through small sticks and stones often found in alluvial clays. Auger extrusion machines replaced the hand-mold or pressed-brick methods that had been used almost universally for thousands of years. 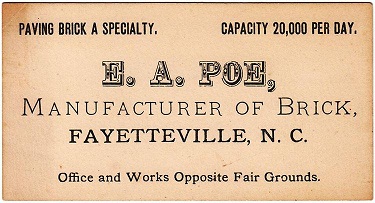 In the 1860s tunnel kilns were patented, revolutionizing the brick industry for mass production. The first successful tunnel kiln in North Carolina was built by Isenhour Brick and Tile Company in Spencer in 1938. A North Carolinian, James Columbus Steele, played an important part during the late nineteenth century in developing American-based brick manufacturing equipment by supplying brick machinery parts for manufacturers. He also designed in 1887 and patented in 1889 a two-wheeled, hand-operated "brick truck," which enabled a person to carry freshly made "green" bricks to the dryer and then the kiln for firing. Steele's four sons further developed innovative machinery such as clay feeders and reel cutters to side-cut the brick so that the header ends would match the faces. J. C. Steele & Sons eventually became one of the most successful brick machinery corporations in the world.

As the twentieth century approached, brick manufacturing plants were built all over the state. For a time after World War II, North Carolina was the leading brick-producing state in the United States. By 1960 the industry had 30 plants in 20 counties, most near large cities accessible to rail lines and major highways. The state's manufacturers in 2004 produced approximately 10 percent of the nation's brick, or about 1 billion bricks annually.

Brick Institute of America, Profile of the Brick Industry (1990).