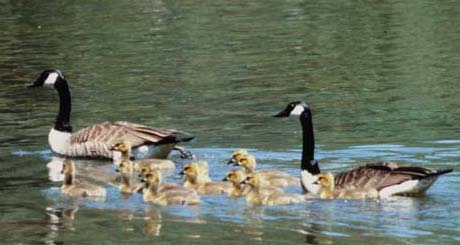 Monogamous—male and female usually bond for life. Male is called gander, female is called goose. Sexually mature between 2 and 3 years. Most successful breeders are 4+ years. If one dies another mate is found. Among the first birds to nest in the spring. Adults raise a single clutch each year. In southern locations, a 2nd nest may be attempted if the first nest fails.

Called goslings. Average clutch size of 5.14 eggs. Completed clutches range from 1-23 eggs. Incubation period is 25-30 days depending on the subspecies. Families remain together at least until after the young are able to fly and the adults have completed their molt. 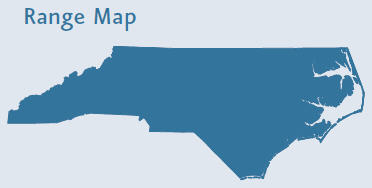 Canada geese are the most widely distributed waterfowl species in North America. The breeding range includes most of the United States (including Alaska) and throughout Canada. Migrant Canada geese that winter in North Carolina nest primarily along the Ungava Peninsula in northern Quebec, Canada and along a portion of James Bay in southern Ontario, Canada. Resident Canada geese nest throughout North Carolina with highest concentrations in the central portion of the state. 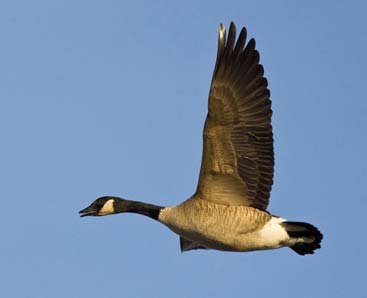 With its characteristic “honk”, widespread breeding distribution and ability to adapt to suburban environments, the Canada goose is likely the most recognized waterfowl species in North Carolina. Although similar in appearance, Canada geese can be divided into 11 subspecies partially based on body size, subtle differences in coloration and breeding distribution. Although most sub-species or populations are migratory in nature, populations of non-migratory Canada geese have been increasing in North Carolina and elsewhere over the last 20 years.

North Carolina contains both migratory and resident (non-migratory) populations of Canada geese. In northeast North Carolina, during the 1940’s and 1950’s, numbers of migrant geese exceeded 200,000 in some years. Mattamuskeet National Wildlife Refuge provided the core area at this time along with areas near Currituck and Pamlico Sound. In central North Carolina, the privately owned Gaddy’s Goose Pond in Anson County once attracted 10-15 thousand migrant geese. In general, numbers of migratory geese in North Carolina have declined dramatically over the last 60 years with perhaps no more than 10-12 thousand geese currently in the primary wintering area in northeast North Carolina. Reasons for the long-term decline are complex and likely not the result of any one factor. Likely causes include changing farming practices in northern states that encourage geese to stop before they reach North Carolina, milder winters, and possible past overharvest of those geese with a strong desire to migrate to North Carolina. 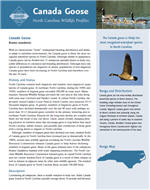 Considering all subspecies, there is sizable variation in body size. Adult Canada geese found in North Carolina typically average about 10 pounds and between2 ½ and 3 feet in length. Males, also called ganders, are larger than females. Although the various subspecies differ in some ways, all have similar characteristics: a black bill, black legs and black feet; black head and neck, with a white cheek patch that usually covers the throat; back, wings, sides and breast are various shades of gray and brown; white belly, flank and undertail coverts. Black tail and rump are separated by a white V-bar formed by the white uppertail coverts. Canada geese are easily distinguished by their “honking” call and appropriately nicknamed “honkers” by many people. 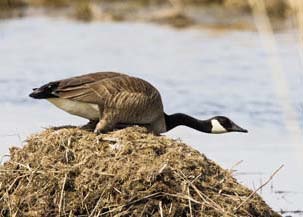 Nesting season varies considerably ranging from March-June in southern locations but usually in May for migrant geese in northern locations. In North Carolina, migratory Canada geese will start to arrive from their northern breeding locations in early October, but most birds do not arrive until mid-December. Return migration occurs from mid-February to late March. Flock sizes increase during fall and winter especially where migrant populations congregate at preferred locations. Flock size may exceed 1,000 birds and are most readily observed in these numbers when feeding in waste grain fields. 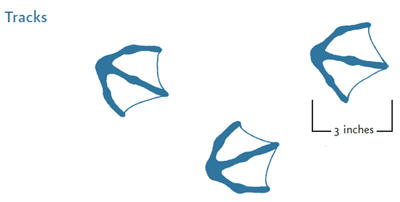 In 1988 and 1989 the N. C. Wildlife Resources Com mission established field sanctuaries and feeding areas for migratory geese out of its concern for their dwindling population. In these feeding areas, plantings of winter wheat and corn have been left unharvested and hunting is not permitted.

Our resident (non-migratory) Canada geese can become tolerant of humans. In urban/suburban areas such as city parks and lakefront property there is often a temptation to artificially feed wild animals such as Canada geese. However, feeding of geese is discouraged. Feeding artificially concentrates birds in an unnatural setting creating a number of concerns including increasing the risk of disease transmission, making the geese dependent upon handouts, and spoiling beaches and lawns with large amounts of feces and feathers. Once large numbers of resident geese become established at an area and become habituated to human activities such as artificial feeding, they can become very difficult to remove and conflicts are inevitable.

Credits
Produced by the Division of Conservation Education, Cay Cross–Editor.
Illustrated by J.T. Newman. Geese and goslings, Joe Fuller, NCWRC; Other photos, René Lortier.
The N.C. Wildlife Resources Commission is an Equal Opportunity Employer, and all wildlife programs are administered for the benefit of all North Carolina citizens without prejudice toward age, sex, race, religion or national origin. Violations of this pledge may be reported to the Equal Employment Officer, N.C. Wildlife Resources Commission, 1751 Varsity Dr.,
Raleigh, N.C. 27606. (919) 707-0101.