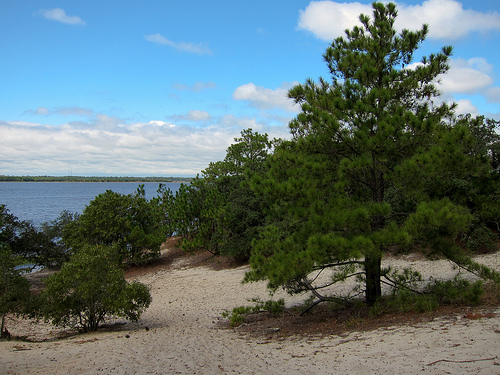 Cape Fear Indians were likely associated with North Carolina's eastern Siouan tribes, possibly the Waccamaw, but it is not clear whether they were independent or part of some other tribe. The native name for the tribe is unknown, and no vocabulary has been preserved. Although five Cape Fear Indian villages were reported to have existed in 1715, the only village mentioned by name is Necoes, located approximately 20 miles from the mouth of the Cape Fear River, probably in modern-day Brunswick County. The tribe's population in 1600 was estimated at 1,000. Contact with the Cape Fear Indians was made by several early voyagers, including Giovanni da Verrazano in 1524 and William Hilton in 1661 and 1663. Hilton is reported to have met with Watcoosa, "king" of the Cape Fear Indians, at Crane Island (now Big Island, about 13 miles below Wilmington). Watcoosa is said to have sold Hilton the river and contiguous lands. In 1664, after settlers seized some Indian children and sent them away, evidently into slavery, the Indians drove the settlers away.