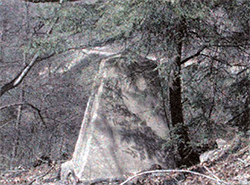 Cathey's Fort was built in McDowell County by William Cathey in 1776. Cathey had purchased land near Turkey Cove at the foot of the mountains and there, where Cove Creek joined the North Fork of the Catawba River, he made his home. The fort was raised to protect Cathey's family and his neighbors from the Cherokee Indians. Until Davidson's Fort was built soon afterward in what is now Old Fort, Cathey's Fort was the farthest western military outpost in North Carolina during the Revolutionary War. Both forts played a part in the western campaigns of the war, including events leading up to the Battle of King's Mountain on 7 Oct. 1780.

I looked in a few books in our library for soldiers in the Revolutionary War. There was only 1 Thomas Downs and he was in Mecklenburg County. What is your source that he was under General McDowell?

correction on date jesse was

correction on date jesse was wounded that was 1782 jesse,s brother my great gradfather james was at kings mountain with standing army of col roebuck 1780 thanks again

I believe the following links can help you locate Cathey's Fort. This first link simply shows the location of McDowell County (to provide you with a larger context):

Finally, here is a link to the location described on the page describing the marker ("US 221/NC 226 north of Woodlawn"):

Note: Cathey's Fort was located in what we today call McDowell County: this county did not exist as a formal entity in the 1780s.

I hope this was helpful.

i have been trying to find

i have been trying to find turkey cove all i knew it was on the north carolina frontier, my great uncle jesse hulsey was shot in the left arm by the indians when they attacked the turkey cove in 1780 , he was one of sixty to receive a pension from north carolina any further info would be appreciated