by Matthew Franke, 2012, University of North Carolina at Chapel Hill 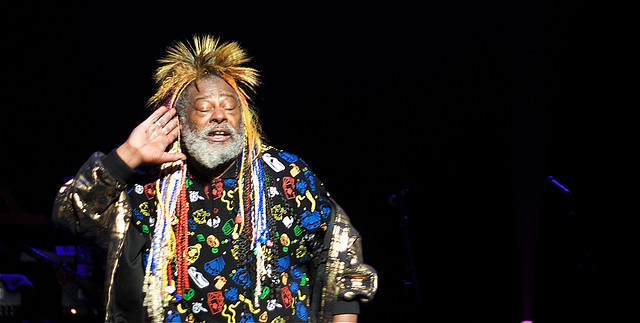 George Clinton (nicknamed "the Prime Minister of Funk" and "Dr. Funkenstein") is a singer, songwriter, and producer best known as the leader of the popular funk bands Parliament and Funkadelic (a.k.a. P-Funk). He was born July 22, 1941 in an outhouse in Kannapolis, N. C., the eldest of nine children. The family soon moved to Washington, D.C., and settled in Plainfield, New Jersey, in 1952.  By 1955 Clinton was part of a Plainfield-based doo-wop group called the Parliaments whose sound was inspired by Frankie Lymon and the Teenagers.

Clinton supported himself at this time by working as a hairdresser, and by 1964 was working with Jobete Records, a company affiliated with Motown Records.  After years of singing in high schools, bars, and clubs, the Parliaments auditioned for Motown, but never got a contract. Instead they recorded with the smaller firm Revilot Records, a subsidiary of Golden World Records, where they had one hit, 1967's "(I Wanna) Testify." By 1969, however, Revilot had folded, and Motown had bought Golden World records, leaving the Parliaments temporarily unable to use their name due to legal difficulties.

Clinton used this turn of events as an opportunity to reinvent his band. The Funkadelics, the back-up band that had accompanied the Parliaments, now became the main attraction, renamed "Funkadelic."  The result was that Clinton now used the same singers and musicians to form two unique funk bands, Funkadelic and Parliament, which performed throughout the 1970s. Clinton's loose affiliation of roughly fifty musicians, collectively known as the P-Funk Mob, came to include several other bands, all of which he helped to produce: Bootsy's Rubber Band, Parlet, the Brides of Funkenstein, and the Horny Horns. P-Funk also spawned another band, Mutiny, which consisted of disgruntled members of the Mob who were dissatisfied with Clinton's leadership.

P-Funk was inspired by a remarkably diverse group of artists. P-Funk's debt to soul and early funk music was clear from their membership: Bootsy Collins and Fred Wesley had previously played with James Brown. Clinton identifies Sgt. Pepper's Lonely Hearts Club Band by the Beatles, Tommy by the Who, and the musical Hair as inspirations for the dramatic spectacle of Parliament's Earth tour, in which Clinton, as Dr. Funkenstein, descended from his spaceship to bring the gift of funk to the masses and battle his arch-nemesis, Sir Nose D'Voidoffunk. Funkadelic, on the other hand, was inspired more by hard rock and psychedelic performers such as Led Zeppelin, Cream, and Jimi Hendrix, and emphasized instrumentalists such as Eddie Hazel on guitar (featured in the song "Maggot Brain") or Bernie Worrell on keyboards. Funkadelic songs tended to have darker, more serious lyrics, often with political or social commentary, in keeping with their heavier, more experimental musical style. The music of both bands had a spiritual element, emphasizing transcendence, oneness, and liberation from social norms: "Free your mind and your ass will follow/The kingdom of heaven is within" (Funkadelic, "Good Thoughts, Bad Thoughts"). P-Funk philosophy owed much to the 1960s counterculture movement, and the members used hallucinogenic drugs (especially marijuana and LSD) freely.

Clinton's bands combined talent, energy, spectacle, and funk in a winning combination. Parliament conquered the rhythm and blues and pop charts with two platinum albums, The Mothership Connection (1975), Funkentelechy vs. the Placebo Syndrome (1977), while Funkadelic achieved similar success with One Nation under a Groove (1978), which topped the R&B charts and produced a hit single in its title track. The bands also achieved several number one R&B hits with Parliament's "Flash Light" and "Aqua Boogie" (1978), and Funkadelic's "(Not Just) Knee Deep" (1979). In the same decade, Clinton married his wife, Stephanie.

These successes came at a price, however, as Clinton's management of the bands, problems with record labels, and disputes over money led to dissatisfaction among many musicians in the P-Funk Mob. Both Parliament and Funkadelic had disbanded by 1981, and Clinton turned to solo work, backed by remnants of the Mob (now known as the P-Funk All-Stars). His 1983 album Computer Games (1983) reached number three on the R&B charts, and has been his greatest solo success to date. His problems continued, however, and Clinton went bankrupt in 1984. While his later albums have been popular with his loyal fans, they have performed poorly on the charts.

Clinton engaged in several collaborative projects, producing the Red Hot Chili Peppers' second album, Freaky Styley in 1985, and singing duets on Prince's album Graffiti Bridge in 1990 and 2Pac's All Eyez on Me in 1996.  In 1993 and 1994, aware of the role that funk samples played in hip-hop, he issued three albums of samples from his back catalog, but the albums' royalty scheme was not effective.

In 1997 Clinton was inducted into the Rock and Roll Hall of Fame along with the other members of Parliament-Funkadelic. In the same year, the NAACP gave him an Image Award. In 2009 BMI gave him the Urban Icon Award, and he was inducted into the North Carolina Music Hall of Fame. In 2011, Clinton gave the Smithsonian National Museum of African American History and Culture the only surviving replica of the Mothership that Parliament-Funkadelic had used in its stage shows.

Clinton currently lives in Tallahassee, Florida. He has two sons; Tracey and Shawn; his third son, George Jr., died in 2010.

Vincent, Rickey. Funk: The Music, the People, and the Rhythm of the One. Forward by George Clinton. New York: St. Martin's Griffin, 1996.