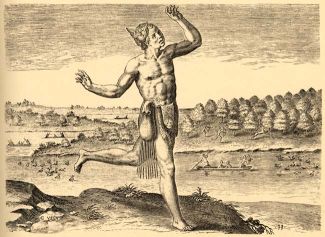 Conjure is based on the belief that psychical and magical powers can be exercised in such a way that spells may be cast, enchantments made, bad or good luck established, the future foretold, lost items found or thieves detected, sickness and death induced, or healing performed. Among American Indians and African slaves in North Carolina, the ability to perform these acts was inherent from birth in the practitioner, rather than gained by a compact with Satan as in the European tradition.

In 1767, when Johnston County slaves wished to influence the actions and attitudes of their masters, they traveled to Dobbs County to consult a man named Quash belonging to the Croom family. In 1779 they consulted two other practitioners of conjure in the Smithfield area: Old Bristow, belonging to Col. Samuel Smith, and Frank, belonging to the firm of Mallette, Tolar, and Estes. All three conjure doctors supplied them with mixtures to be added to the food cooked for their masters' families. In 1768 and again in 1779, the conjure was discovered when the white families fell deathly ill from their food, and the slaves involved were sentenced to have their ears cut off at the pillory and to receive public whippings. In 1780, when Lewis Bryan was poisoned to death by his cook, Jennie, she was tried and convicted of murder and sentenced to be burned at the stake.

Though sickness and death resulted from the use of conjure doctors' mixtures in these cases, it is clear that the object was not sinister. In this respect the intent of conjure reflects a departure from the original dark aims of obeah, a system of magic and sorcery originating in the West Indies and popular among slaves in the American South. The effort to invoke the destructive powers of obeah remained a part of the conjure doctor's stock in trade. However, generations of exposure to European tradition introduced elements common to European witchcraft and herbal lore, thus producing the syncretic, or combined, form of conjure that has, as a subcultural belief and practice, survived in North Carolina's African American community for three centuries.

It is not known when conjure achieved its full syncretic form, but it appears to have done so by the first half of the nineteenth century. Writer Charles Waddell Chesnutt, in his famed work The Conjure Woman (1899), drew on a tradition of an antebellum syncretism centered in a free black settlement south of Fayetteville. His conjurers appear to be based on actual, though unidentified, free black persons.

Few names of North Carolina practitioners of conjure are known. Joe Sorrell of Bertie County, celebrated during the late antebellum period for his powers, achieved notoriety after the discovery that many harmful spells he was paid to lift were actually cast by him. Murphy Harshaw of Cherokee County, feared by other blacks in his community for his reputation as a conjurer, was brutally murdered by them in 1875. William H. Moore, state representative from New Hanover County in 1874-75 and state senator in 1876-77, was widely known as a practitioner of conjure in both its harmful and helpful aspects. William Anderson, who maintained his practice on the Morgan Farm in Nash County until his death around World War II, and "Doctor" Jim Jordan of Maneys Neck in Hertford County, who practiced until his death in 1962, enjoyed a reputation as helpers and healers and drew clients from several states along the eastern seaboard.