During the last half of the nineteenth century, an influx of German immigrants brought lager beer with them to many parts of the United States. The American taste for beer grew steadily during this period, so that by 1890 beer eclipsed in volume other forms of alcohol available to American drinkers.

Yet, during the same period when beer was on the rise in America as a whole, North Carolina’s production of hops, a key ingredient adding to the flavor of beer, decreased steadily. Hops has limited application outside the brewing of beer; decline in local farming of hops in North Carolina and the South as a whole may be seen as part and parcel of the rising temperance movement, which sought the banning, or prohibition, of alcohol.

The temperance movement in North Carolina, as elsewhere in the country, painted a bleak picture of alcohol’s influence on society. All manner of social ills were attributed to the consumption of alcohol, including disease, crime, poverty, physical weakness, dishonesty, and the orphaning of children. Saloons, most of which were run by large breweries, proliferated during the last half of the nineteenth century. Breweries pushed the number of saloons ever higher in an effort to starve out competitors; in some communities, the number grew to one saloon for every one hundred-fifty to two hundred people. Because this density was not sustainable by beer and other alcohol alone, saloon keepers sometimes offered other illegal activities to lure customers, including prostitution, gambling, and cock-fighting. 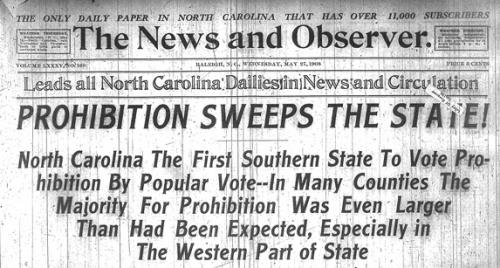 Although the nationwide ban on selling and manufacturing alcoholic beverages, known as Prohibition, did not go into effect until 1920, by that year nineteen states, including North Carolina, had already passed their own laws illegalizing alcohol. North Carolina was in the vanguard of the temperance movement organized by such groups as the Anti-Saloon League and the Women’s Christian Temperance Union that was sweeping the country; in 1908, twelve years before national Prohibition, North Carolina became the first Southern state to prohibit making, selling, or distributing alcohol within the state’s borders. Temperance had widespread popular support with North Carolina voters, with sixty-two percent of voters choosing the ban in a referendum.

When the Eighteenth Amendment to the United States Constitution was repealed in 1933, brewers and beer lovers in North Carolina had something to celebrate; however, abolishing federal control did not remove the state’s own 1908 prohibition law. Two years passed before the state legislature repealed the twenty-seven-year-old ban. Two years after repeal, in 1937, the North Carolina General Assembly passed the Alcoholic Beverage Control bill establishing the State Board of Control (now known as the North Carolina Alcoholic Beverage Control Commission, or ABC), which began operating stores that sold distilled spirits. The law allowed individual counties to determine whether or not the sale and manufacture of alcohol would be legal within the county’s borders.

Although beer was now legally available in North Carolina, the ABC law set a cap on the amount of alcohol in beer brewed and sold within the state: six percent alcohol by volume (ABV). The law also made brewing beer and selling it on the same premises - in a single word, brewpubs - illegal in the state. Not until 1985, after a lobbying campaign headed by Uli Bennewitz, did legislators pass an amendment to the ABC law permitting such establishments. The next year, Bennewitz himself opened North Carolina’s first brewpub, Weeping Radish, beginning a trend that would prove enduring.

The history of beer in North Carolina reached another pivotal moment in 2005, when the state legislature passed House Bill 392, a measure that amended the ABC Law to raise the nearly seventy-year-old cap on beer from six percent ABV to fifteen percent ABV. This amendment resulted from a two-year campaign, styled Pop the Cap, by local brewers and beer enthusiasts. In 2003, when the campaign started, only four states other than North Carolina had comparably low ABV caps on beer.

Pop the Cap was fueled by a larger trend of smaller breweries opening around the United States, a trend that accelerated in the 1990s and continued into the twenty-first century. While other states had seen the number of microbreweries skyrocket during that period, North Carolina lagged behind because the ABV cap limited the styles with which creative brewers could experiment. Perceiving an injustice, North Carolina’s brewers organized the Pop the Cap campaign to eliminate the ABV limit.

As a result of the campaign, a group of state house legislators sponsored House Bill 392. In an echo of the temperance movement of the nineteenth and early twentieth centuries, the bill engendered controversy from politicians and citizens who feared that eliminating the limit would cause an increase in underage drinking, drunk driving, and other health and safety hazards. Despite this opposition, House Bill 392 was enacted into law by the signature of Governor Mike Easley on August 13, 2005.

In the United States as a whole, sales of craft beer continue to grow, even as overall sales of beer decline. North Carolina contributes more than its share of craft beers.

Since Uli Bennewitz opened the state’s first brewpub in 1986, many North Carolina brewers have followed suit. As of 2010, the state boasts over twenty brewpubs. Combining these brewpubs with local breweries manufacturing, bottling, and distributing their beer to stores (known as production breweries) brings North Carolina’s total breweries to over forty, surpassing the number in any other Southern state.

North Carolina has become a destination for beer lovers from around the world, with the World Beer Festival, held twenty-four times in North Carolina, South Carolina, and Virginia since 1996, showcasing the products of both local and out-of-state brewers. Out-of-state beer festivals, especially the World Beer Cup and Great American Beer Festival, have proven that North Carolina brewers excel at their craft; the state’s breweries have surpassed those of any other Southern state in medals earned over the past few years.

Resources on beer and North Carolina in local libraries [via WorldCat].

"We Called. We Wrote. We Conquered." Pop the Cap. Accessed 10/2010 via the Pop the Cap Web site, formerly located at http:// popthecap.org.