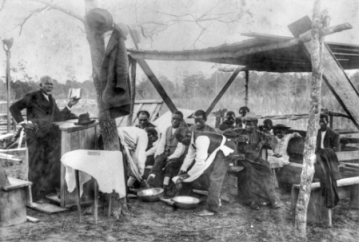 Foot washing is an act of worship practiced by various Christian groups in North Carolina and other southern states. The practice involves bathing the feet of a fellow church member and is usually followed by words of support and fellowship between those involved. Generally, the washing is performed with males and females gathered in separate rooms after the church's observance of the Lord's Supper. The custom of foot washing among Christians is based on the Gospel of John (13:4-15). In this account of the Last Supper, Jesus got up from the table, took off his outer robe, tied a towel around himself, and began to wash the disciples' feet to emphasize that they were to care for each other as he had cared for them.

In North Carolina, foot washing has been practiced in varying degrees by a variety of Baptist groups, including Primitive, Regular, Old Regular, Free Will, Pentecostal Free Will, and Separate Baptists. The modern-day practice is most evident among the Free Will Baptist groups in the state, although some Roman Catholic, Moravian, and Episcopalian churches are among other congregations that follow the custom.

Thanks fir the info on this

Thanks fir the info on this picture. We have a copy of the photo in the museum at lake waccamaw and it is one of our few, but priceless, photos of Black history in our are