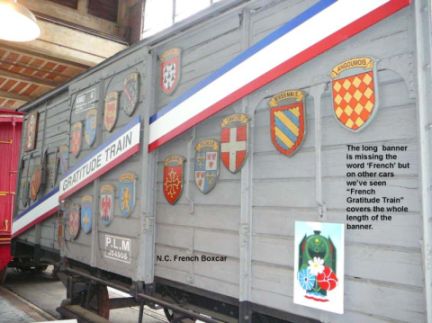 The French Gratitude Train was sent to the United States by the citizens of France in appreciation for U.S. military involvement in World War II and American postwar relief efforts. An ocean freighter arrived in New York harbor on 3 Feb. 1949 carrying 49 small French boxcars filled with gifts. These cars, "Hommes 40-Chevaux 8," were French military boxcars designed to carry 40 men or 8 horses. Built between 1872 and 1885, the boxcars had been used in both World Wars as troop and animal carriers. Each car was 29 feet long and weighed approximately 12 tons. They now made up the French "Gratitude Train" and carried gifts from the 40 French provinces. The cars were designated for each of the U.S. state capitals, with one to be shared by the District of Columbia and the Territory of Hawaii.

The tremendous outpouring of U.S. relief sent to the French in the years immediately following World War II culminated with approximately $40 million in relief supplies in the American Friendship Train in 1947. This effort inspired a French rail worker and war veteran named André Picard to suggest that France reciprocate. His original idea was to present one boxcar loaded with gifts representing the country. A local veterans' organization adopted the proposal, and a committee was established to solicit gifts. The response was astounding, and the effort gained national momentum. The National Headquarters of the French War Veterans Association took control and decided to fill 49 cars with gifts. Each car was decorated with the shields of the 40 provinces and other designs.

The boxcar intended for North Carolina arrived in Raleigh on 8 Feb. 1949 and was officially received by Governor W. Kerr Scott. Following the reception ceremony and a parade, the boxcar and the gifts were moved to the state Museum of History for display. Many of the gifts remained with the North Carolina Museum of History, but others were distributed to libraries, schools, and other museums across the state. The car itself was given to the Forty and Eight Society of the American Legion.

In 1981 the Forty and Eight Society loaned the boxcar to the North Carolina Transportation Museum in Spencer. In 1996 the car was repaired and painted, and missing shields were replaced. The car is on exhibit at the museum. Although many of the cars of the French Gratitude Train have been lost, more than half remain on exhibit throughout the United States.

Andre Picard, a French veteran of World War II, was one of the originators of the idea of the Gratitude Train.

Hello, I'm french, and I

Hello, I'm french, and I prepare the first exhibition in FRANCE about GRATITUDE TRAIN.
I'm searching informations about the gifts which was in the train.

If you have photos, letters, or informations about this, I could be interested to receive copy
for my exhibition. If some people want information, ask your question, I'll try answer.

THANKS FOR YOUR HELP
GUY

Thank you for visiting us at NCpedia and taking time to share your project and question.

This is an excellent question!  Unfortunately, NCpedia does not have any additional resources beyond the article you visited, but I have a few suggestions.

First, I recommend checking WorldCat.  You may find publications as well as library and museum special collections about the trains.  Here is a link to search results: https://www.worldcat.org/search?q=%22gratitude+train%22&qt=results_page

The North Carolina Museum of History has a number of items in their collections that appear to be related to the train that came to North Carolina.  Please contact John Campbell at the museum for more information.  He will be able to tell you more about the specific items in the collection and he will be able to work with you for digital images and other permissions-related information.  Here is a link to the museum collections web page: http://ncmuseumofhistory.org/collections/contact-expert.   And his email address is: john.campbell@ncdcr.gov.

The State Historical Society for North Dakota has an interactive exhibit online that includes objects from North Dakota’s train.  This sounds like a promising resource: http://history.nd.gov/fgt/index.html.  Other states have similar online exhibits and collections.

There is a website for the Merci Train.  I cannot vouch for the quality of the information, but it looks helpful: http://www.mercitrain.org/

I don’t typically recommend Wikipedia as an information source, however sometimes it is useful for getting started and finding potential compilations. If you haven’t checked it out already, here is the link: https://en.wikipedia.org/wiki/Merci_Train

I hope this helps!  Please let me know if we can help with anything else.

Is it possible to find

Is it possible to find pictures of the boxcar that arrived in NC on February 8, 1949? I found one article that states a special guest, R.V. Collie, a Confederate Army veteran who turned 105 years old two days prior, was at the ceremony. Surely photos were taken. This R.V. Collie is the great-great-grandfather of my adult children. Their father died 9 years ago and I thought this would be an extra tidbit of history to add to their collection. Thank you!

Thank you for visiting NCpedia and taking time to share this question.  I have also sent this reply to the email address you included with your post.

I am searching a number of collections and newspapers and have also contacted the State Archives of North Carolina to see if they have photos of the event.

I'll keep you posted if we find something!

As a retired teacher, I just

As a retired teacher, I just learned 4 years ago about the "Merci Gratitude Train." My grandson now in the 6th grade is doing his social studies project on the train. He is trying to find a picture of Andre Picard and is having no luck. Do you have anything to share? Linda

Thanks for visiting NCpedia and that's a great question!

Here is a photograph of the train in Los Angeles, and Andre Picard appears to be the first in from the right -- http://goo.gl/1aMHEj.  This image is included in the Digital Public Library of America.