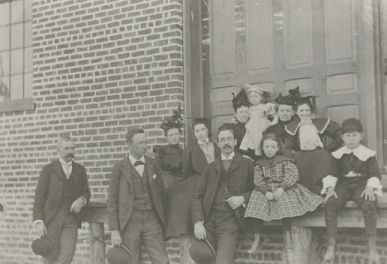 The Fries Manufacturing and Power Company was established in 1897 as a spinoff of the F&H Fries Company, a textile concern founded by Moravian businessman Francis Fries in 1846. Chaired by Francis's son Henry E. Fries, the power company secured a franchise to provide electricity to the towns of Winston and Salem and constructed a dam on the Yadkin River near the community of Idols. When the dam began producing electricity in 1898, it was the first instance of long-distance electrical transmission in the South. Local tradition maintains that the earliest transmissions were carried by barbed wire. The Fries Manufacturing and Power Company was sold to Southern Public Utilities in 1913.

I have a letter by Henry

I have a letter by Henry Fries dated May 12 1904 handwritten by him on the Fries Mfg & Power Co letterhead. I would like to donate it.
Please advise

For information about donating to the Government & Heritage Library, part of the State Library of North Carolina, please visit this link: https://statelibrary.ncdcr.gov/ghl-materials-donation-request

Alternatively, you might look into donating this letter to the State Archives of North Carolina: https://archives.ncdcr.gov/node/77