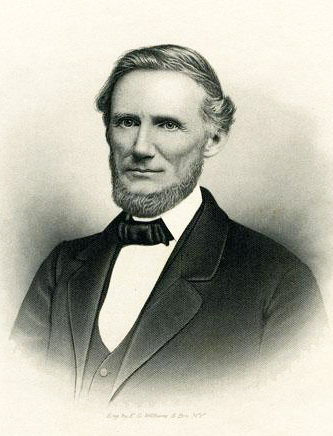 Francis (Franz) Levin Fries, cotton manufacturer, was born in Salem, the son of John (Johann) Christian William (Wilhelm) Fries, who had been born in Barby, Germany, 22 Nov. 1775. William was trained as a cabinetmaker and in 1809 arrived in Salem, where he worked in the Single Brothers cabinet shop in which he was master from 1811 to 1815, when he opened a shop of his own. However, after about 1820 he did very little cabinetwork himself but turned to farming and other business, culminating in textile manufacturing. On 11 Oct. 1811 William married Johanna Elisabeth Nissen, daughter of Tycho Nissen, a wainwright and cabinetmaker. They had three children: Francis Levin; Carolina Amanda (16 June 1817–14 Feb. 1881), who married Edward Belo, also a cabinetmaker and the son of a cabinetmaker; and Henry William (Heinrich Wilhelm) (5 Mar. 1825–4 Nov. 1902).

Francis Levin was baptized in the Moravian church the day after his birth. On 12 May 1818, when he was five and a half, he entered the school for little boys. He did so well that his parents wanted him to continue his formal education rather than be apprenticed to a trade. On 28 Sept. 1827 he was accepted in the "Paedagogium," Nazareth Hall, in Nazareth, Pa., to study theology. He completed school and arrived home on 23 June 1830 "for a visit," with prospects of returning in October to teach at Nazareth Hall. But in September, when a vacancy occurred in the Salem Boys School and Francis was preferred to another candidate with more experience, he remained in Salem and taught until 1 July 1835, when he resigned to go north for "a years visit" to learn about manufacturing. Returning on 30 Apr. 1836, he supervised the building of the Salem [cotton] Manufacturing Company's plant, of which he became an officer.

Fries was highly respected in Salem, especially for his business ability, though like his father with whom he became associated in business, he had a mind of his own. Capable citizens in Salem were called upon to perform a variety of gratis civic duties. Fries and his father both provided many of these services. Almost as soon as he started working at the cotton mill, Francis was elected a member of the Aufseher Collegium, the supervisory committee in charge of business in Salem; at times he also kept its minutes. He was continually reelected for two-year terms. In April 1838, and again in February 1845, both he and his father resigned. Their opinions on slavery, black people, and their place in Salem were cited as the reason for their resignations. Each time, however, Francis was soon reelected. He also was an officer in the Salem (municipal) Fire Company in 1845. In 1849 the county in which Salem was situated was split and a court established adjacent to Salem; in 1851 the new town was incorporated as Winston. Fries was made chairman of the county court, and in succeeding years he was elected one of the seven commissioners of the town of Winston. In 1858–59 he represented Forsyth County in the state legislature.

Like his father, Fries found business more to his liking. It was probably due to him that he and his father in October 1839 decided to build a wool spinning mill run by steam power. Wool carding operations began in 1840; shortly afterward, dyeing and fulling and spinning and weaving processes were undertaken. In 1846 Fries's brother Henry joined the firm, which then went by the name of F and H Fries. Two years later they added a cotton mill, which ran until 1880 when it was converted to the enlarged woolen mill.

In addition to the textile enterprises Fries designed and built a house for the minister, probably the bank building for Salem, a gunpowder storage building (with Edward Belo), and a brick kiln. In 1847 he rented the Schober paper mill.

Despite disapproving of slavery and enslavement, the Frieses owned enslaved people. The Frieses used the labor of enslaved people to empower the wealth and success of their businesses. As a consequence, they acquired more enslaved people than the town fathers approved. In 1847, they had seven white and sixteen black (enslaved and free) people working in the factory and in their homes. The number increased until the Civil War. The Frieses were cited as generous to the enslaved people that they owned. Francis, who called his factory help "my boys," frequently gave them time off for rest while he continued working. Sometimes he shut down the factory while he and the crew went skating, or to the circus, or rabbit hunting: "Myself and the boys went skating till noon," he once wrote in his diary.

He died of "bronchites" after a long and lingering illness. A portrait of Fries and his wife, painted in 1839 by Gustavus Grunewald, is own by Old Salem, Inc.

Diary and Memoir of Francis Levin Fries, Minutes of the Aufseher Collegium, and Minutes of the Elders Conference (Archives, Southern Province, Moravian Church in America, Winston-Salem).

Reichel, William Cornelius. Historical sketch of Nazareth Hall from 1755 to 1869; with an account of the reunions of former pupils and of the inauguration of a monument at Nazareth on the 11th of June, 1868, erected in memory of alumni who fell in the late rebellion. Philadelphia: Printed for the Reunion Society of Nazareth Hall by J.B. Lippincott. 1869. 60. https://archive.org/stream/historicalsketch00reic#page/60/mode/2up (accessed March 11, 2014).