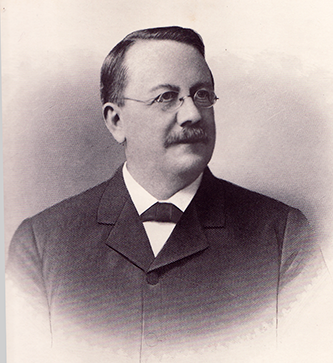 John William Fries, industrialist, inventor, student, and church leader, was born in Salem, the oldest son of Francis Levin and Lisetta Maria Vogler Fries. In 1840 Francis L. Fries had opened a textile factory in Salem, which became known as the F and H Fries Woolen Mill in 1846 when he took in his younger brother, Henry, as partner. John Fries's education at Salem Boys School ended at the age of fourteen when he went to work full time in his father's mill. This early experience with machinery and metals proved valuable, for in later years he became known as an inventor of cotton mill machines and processes for dyeing yarns and cloth. Francis L. Fries died in 1863, leaving to his young son John the burden of taking his place in the family business. Nevertheless, John Fries always found time for reading and studying. At twenty he entered The University of North Carolina where he continued his formal education for a year and a half; he then returned to Salem to become a partner with his uncle Henry in the family mill. On 25 Oct. 1870, he married Agnes Sophia deSchweinitz by whom he had two children: Adelaide Lisetta and Mary Eleanor, who married William A. Blair.

Adding civic duties to his full schedule, Fries served several terms as Salem town commissioner and magistrate. A Democrat, he became a member of the County Board of Commissioners where he worked for better roads, and for six years he served as judge of the county court. Because he was for "sound money," that is, gold instead of silver, Fries voted for McKinley instead of Bryan in the presidential election of 1896. The same year, at a meeting in Indianapolis, he was elected a member of the executive committee of a national group of commercial organizations concerned with the means of perpetuating the gold standard. In 1897, President McKinley appointed him a member of the Monetary Commission meeting in Washington, D.C., to make a "thorough and exhaustive study of America's financial system and its need." Fries also contributed several magazine articles on sound money questions. In June 1926 he went to Chapel Hill to receive the honorary LL.D. degree from his alma mater, which he had served for forty years as a member of the board of trustees.

The son of devout Moravian parents, Fries became a communicant member of the Home Moravian Church in Salem on 20 Mar. 1864. For thirty years he was a member of the church's board of trustees, serving as chairman from 1897 to 1909. On 14 Dec. 1899 he was chosen by the synod as a member of the Provincial Elders Conference, the governing board between triennial synods, of the Southern Province of the Moravian Church; he was reelected at each of the succeeding synods. He was chosen delegate to represent the Southern Province at two of the general synods (meeting every ten years) held in Herrnhut, Saxony, in 1899 and 1909 and served on the finance committee. For thirty years he was a member of the board of trustees of Salem College and Academy.

Fries also was president of the F and H Fries Company, Arista Mills Company, Peoples' National Bank, Salem Cemetery Company, and the Chamber of Commerce; a director of the North Carolina Midland Railroad, Wachovia Bank and Trust Company, and Fries Manufacturing and Power Company; and a member of the Society of Chemical Industry and of the Academy of Social Science. After a lingering illness, he died at his home in Winston-Salem and was buried in the Salem Moravian graveyard.