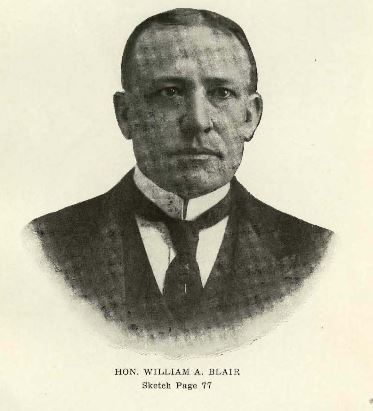 William Allen Blair, chairman of the state welfare board in North Carolina, banker, and civic leader, was born in High Point to Solomon I. and Abigail Hunt Blair. His maternal grandfather had been a prominent Quaker minister and a founder of Guilford College. His father, a farmer and teacher, was a Moravian, and Blair continued the family interest in the Moravian church.

Blair exhibited early aspects of his later intellectual prowess. He was reading by age four. After education in the public schools and some work at Guilford, he left for Haverford College, from which he was graduated in 1881 as a member of Phi Beta Kappa. From there he went to Harvard for a second A.B. degree in 1882.

Blair returned to North Carolina as principal of the high school in High Point. For the next few years his career included several teaching or school administrative posts, as well as additional study. He was a teacher at the North Carolina State Normal School, principal of the high school in Winston-Salem (1885), and superintendent of the State Normal School (1887–89); he did graduate work at Johns Hopkins University and completed a master's degree at Trinity College (1889). While superintendent of the normal school, he became editor and owner of School Teacher, the largest educational magazine in the South. In 1889 he was North Carolina representative to the Paris Exhibition and delegate to the World Sunday School Convention in London.

In 1890 his career shifted from education to banking and business. He became president of the People's National Bank of Winston-Salem, a post he held until 1897, when the bank was reorganized and he took the position of vice-president. In this decade he also studied law and in 1894 was admitted to the North Carolina bar. His interest in banking led him to write a brief History of Banking in North Carolina, from 1834 to 1898.

In the 1890s, Blair also undertook the avocation in which he made his greatest contribution to North Carolina. In 1891, Governor Thomas M. Holt appointed him to the North Carolina Board of Charities and Public Welfare. By 1904 he was elected chairman of the board, a post he then held continuously until his death. When Blair first joined the board, its work was largely supervision of the few state institutions for the needy. In the Progressive Era, however, under the leadership of Blair and board member A. L. McAlister, the board reorganized and began systematically to encourage the creation of county welfare boards all over the state. The board also involved more professional social workers in its operation and pioneered the county unit welfare system, which was ideally suited to a predominantly rural state like North Carolina. 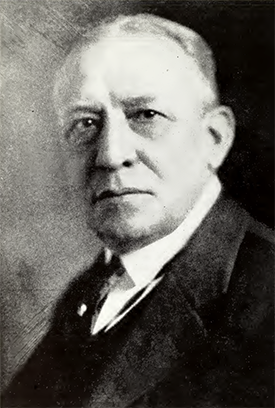 With the advent of the New Deal, the local welfare effort in the state was enormously expanded and partially subsumed in federal-state programs. Blair energetically involved himself in all these changes, often lobbying expertly with state and civic leaders to maintain the integrity of the state welfare system. In particular, he fought to keep that system out of politics, an accomplishment Governor Melville Broughton acknowledged when he said, upon the presentation of a certificate of appreciation to Blair in 1944: "I think it is significant that in the field of human welfare we have subordinated politics to a doctrine of genuine service in the State government. . . . The fact is significant that we have not let this agency of government be subjected to conditions and changes that ordinarily accompany political changes within the State government."

Aside from welfare leadership, the many accomplishments of Colonel Blair, as he was often affectionately called, included service as president of the North Carolina Bankers' Association (1898), as member of the U.S. Assay Commission (1905), as vice-president for North Carolina of the American Bankers' Association (1919), and as trustee of Peabody College for Teachers, Salem College, and Winston-Salem Teachers' College. He was the first president of the Winston-Salem YMCA. In addition to his continuing association with the People's Bank, he maintained business interests as editor and part-owner of the High Point Enterprise and as part-owner of the Pepsi-Cola and Orange Crush bottling companies of Winston-Salem and the Midas Mines and Gross Mines.

For most of his life, Blair made his home in Winston-Salem. He was married to Mary Eleanor Fries, the daughter of John W. Fries, part of a family of prominent Winston-Salem industrialists and bankers. The Blairs had three children, Mrs. R. A. McCuistion, Marian, and John Fries.

Even in his declining years of ill health, Blair continued to be interested in scholarship and public service; he wrote several articles on Moravian settlements and customs in North Carolina. He died at his home in Winston-Salem and was interred in the Moravian graveyard there.