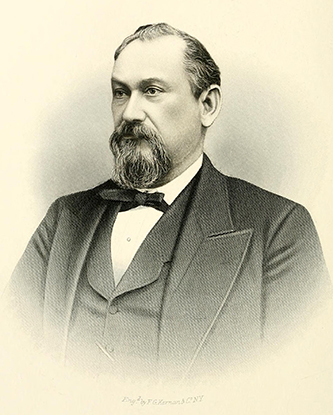 Thomas Michael Holt, textile manufacturer, legislator, and governor, was born at Locust Grove in Alamance (formerly Orange) County, near the site where the Regulators fought in 1771. He was the second son of ten children born to Edwin Michael and Emily Farish Holt. His father was a pioneer in the North Carolina textile industry, as well as a prominent planter and landowner; his mother was the daughter of a prosperous Chatham County farmer.

Holt received his early education at home under a private teacher. He then entered Caldwell Institute, in Hillsborough, where he studied under the Reverend Dr. Alexander Wilson before enrolling in the sophomore class at The University of North Carolina in June 1849. Holt left the university in 1850 to gain practical experience in Philadelphia. He became an accomplished salesman and expert bookkeeper but, at his father's request, returned to Alamance County the following year to assist in the operation of the factory on the Alamance Creek. When Edwin Holt had bought the interests of his partner, William A. Carrigan, the factory name was changed from the Holt and Carrigan Cotton Mill to Edwin M. Holt's and Sons. Thomas worked industriously at the factory, and it was he who began the dyeing of yarn prior to making cloth from it. This made it possible to produce "Alamance plaids."

When the Civil War began, Holt continued to work at the factory; however, in 1861 he took over the Granite Mills on the Haw River and his brother William was called home from the Confederate Army to manage the Alamance factory. Later with his brother-in-law and partner, Adolphus Moore, Holt built a new factory at the lower end of the old Granite Mills on the Haw. By May 1874 some forty houses, a church, and a school had been built for the 175 employees and their families.

Although concerned with the textile industry throughout his life, Holt had a variety of other interests. He served as a magistrate and in 1872 was elected county commissioner, a position he held for four years. Before the Civil War, Holt had been a Whig, but in 1876 he was elected a state senator on the Democratic ticket. In 1882 he was sent to the North Carolina House of Representatives where he served three successive terms and was chosen speaker of the house in 1884. Elected lieutenant governor in 1888, he became governor of North Carolina upon the death of Daniel G. Fowle in 1891. Holt served until 1893 but declined to run for a full term because of his health.

As part of his public service Holt helped to secure the establishment of the state Department of Agriculture, the North Carolina College of Agriculture and Mechanic Arts at Raleigh, and two other state schools at Greensboro. He also served on the board of trustees of The University of North Carolina and of Davidson College. Holt encouraged the expansion of common schools in the state and urged that appropriations to The University of North Carolina be increased. He sought additional aid for the state hospitals at Morganton, Raleigh, and Greensboro, and for the children's home at Oxford. At the county level, Holt assisted in establishing a new system of government, returning governance to the people through the popular election of county officers. (Previously, that practice had been abolished and elections had been turned over to justices of the peace appointed by the legislature.)

Along with his father, Holt became a stockholder, president, and director of the North Carolina Railroad Company, which built a road between Goldsboro and Charlotte. He was also instrumental in the construction of other railroads in the state. When northern businessmen had a lien on the state-owned stock in the North Carolina Railroad, Holt and other North Carolinians went north and succeeded in compromising the debt and saving the stock. Some estimated that they saved the state as much as $5 or $6 million. As president of the North Carolina State Fair for several years, Holt was active in putting the fair on a financially secure basis. He was also a member of the Patrons of Husbandry, or the Grange, serving as president for thirteen years.

During the Kirk-Holden War, both Holt and his brother-in-law, Adolphus Moore, were arrested on Governor William Holden's orders. Holt saw the whole disturbance as a political move to win election by the Radical Republicans. However, he maintained that the Democrats carried the state by 211,000 votes and would have a two-thirds majority in both houses. Radical Republicans first attempted to try those arrested for murder by a military commission, but could not get anyone to sit on the cases. When they turned the remaining prisoners over to the civil courts, over a hundred were quickly released, including Thomas Holt. He long remembered the indignation of the people and the impeachment and removal of Governor Holden from office.

On 17 Oct. 1855 Holt married Louisa Matilda Moore of Caswell County, and they were the parents of six children: Alice Linwood, Charles Thomas, Cora May, Louisa Moore, Ella Moore, and Thomas M., Jr. Holt became a member of the Graham Presbyterian Church on 2 June 1856 and served as a ruling elder from 1859 until his death. In 1895 he was awarded an honorary LL.D. by The University of North Carolina.

Holt died at his home on the Haw River, near the mill he operated. The funeral was held at the Graham Presbyterian Church, and burial was in Linwood Cemetery, Graham.

F.G. Kernan & Co. "Thos. M. Holt." A memorial volume of the Guilford Battle Ground Company. Organized May 6, 1887, at Greensboro, N.C. It contains a brief history of the battle of Guilford Court House, an account of the organization and progress of the Guildford Battle Ground Company, biographical sketches, and a full account of the Holt monument and its dedication, July the 4th, 1893. Greensboro, N.C., Reece & Elam, printers. 1893. https://archive.org/stream/memorialvolumeof00guil#page/n99/mode/2up (accessed April 9, 2013).