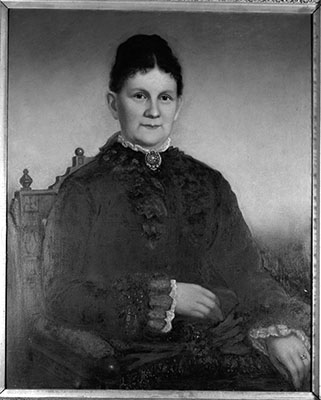 Upon the unexpected death of Governor Daniel G. Fowle, Lieutenant Governor Thomas Michael Holt assumed the governorship of North Carolina. Because of a recent bereavement in the family, Louisa Holt did not often go to Raleigh while her husband was governor.

Louisa Matilda Moore was born in Caswell County on October 15, 1833, to prosperous planter Samuel Moore and his wife Mary A. Bethel Moore. The young woman and the wealthy Thomas M. Holt of Alamance County were married on October 17, 1855, at her home, Mount Pleasant. They lived at Linwood, the Holt plantation in Davidson County. They later moved to an estate in Haw River, where he owned textile mills and built a spacious home. The house, which stood on the west bank of the Haw River, was large and ornate, with many conven­iences. It contained seven bedrooms and two baths and included a connected kitchen and numerous outbuildings. Thomas Holt made a conscious effort to plant trees of all varieties, so long as they were native to North Carolina, on the more than four-hundred-acre estate. A spacious lawn, orchards, and vegetable gardens on nine acres surrounded the house, making it a local showplace.

The Holt family, like most of the wealthy elite of their  time, visited the fashionable resorts of the day. Buffalo Lithia Springs in Mecklenburg County, Virginia, was a favorite destination. There guests spent their mornings playing cards, bowling, or reading. Because of the governor's health (he had Bright's disease), he and his wife often visited Philadelphia for treatment and sometimes went to Florida for rest.

Louisa Holt was known as a personable, kind, and intelligent woman whose husband was very devoted to and protective of her. She had a tranquil goodness that endeared her to those who came to visit. She was also shy, which may explain her uneasiness in performing the duties expected of the first lady. The Holts' daughter Daisy Haywood, who resided in Raleigh only two blocks away from the Executive Mansion, was more outgoing than her mother and often acted as official hostess for her father. In the early 1890s the mansion still had very little furniture. An article about the mansion that appeared in the Raleigh News and Observer in 1938 reported that Mrs. Haywood "decided that the simplest solution would be to move her 10-room household, complete with servants, to the Executive Mansion." The gov­ernor himself brought to the mansion some of his own furniture from his permanent home in Haw River.

Louisa Moore Holt died suddenly of heart failure on December 9, 1899. She was visiting her sister in Burlington for a few days at the time of her death. Following a simple funeral service at the Presbyterian church in Graham, she was buried in Linwood Cemetery in Graham, North Carolina, beside her husband and several of their children.