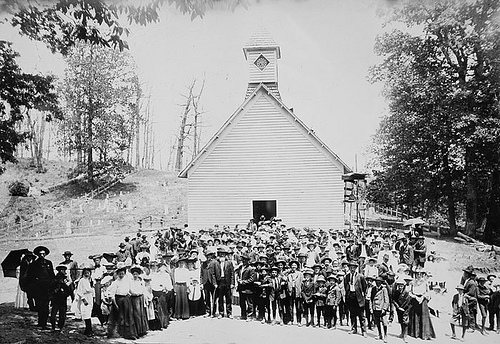 Funerals in North Carolina have evolved to such an extent that the highly personalized communal rituals of the eighteenth and nineteenth centuries now seem foreign and unfamiliar to many people. Funerals during the colonial period were marked by a group celebration complete with gifts for the attendees, usually rings or gloves, liquor, and a meal. Janet Schaw, a Scottish visitor to North Carolina, described the funeral of Mrs. Jean Corbin of Point Pleasant Plantation near Wilmington in 1775: "Every body of fashion both from town and country were invited," but Schaw felt the occasion "greatly hurt" by a group of "volunteers" who descended on the proceedings just in time for a hearty meal of pork, beef, cornbread, rum, and broth.

During the eighteenth and early nineteenth centuries, the absence of the later practice of embalming made it imperative that bodies be buried immediately, but distances often prevented some family and friends from attending a last-minute funeral service. Therefore, the services were often delayed long past the actual burial, which often occurred without a minister's presence. Martha Thomasson Johnson of Yadkin County, for example, died on 3 Mar. 1859 and was buried the next day. Her funeral service was held on 4 Sept. 1859, when a preacher could be obtained and more people notified to attend the event.

Funeral and mourning customs became much more elaborate during the nineteenth century among the middle and upper classes. Although black, conservative clothing had been worn for mourning since the eighteenth century, nineteenth-century widows were expected to don black crape for at least a year after the death of their spouses. This was followed by another year of wearing combinations of black, gray, lavender or purple, and white. A widow could not return to social activities until after her period of mourning was over. For some this period lasted for the rest of their lives. Mourning etiquette was not as strict for men. They often wore somber, dark suits with a black crape armband or hatband. A man was not expected to remain in mourning as long as a woman. He could return to society before a year passed without incurring social criticism.

In the mountains of North Carolina and other rural regions, services prior to interment were often of the hellfire-and-brimstone variety, sometimes presided over by a circuit-riding minister. Services were held in the home or church. When a funeral service was performed at home, at a church, or at a funeral parlor, a brief committal service was often performed at the graveside prior to interment, and this custom has continued into the modern era. Sometimes handfuls of dirt are sprinkled on the closed coffin, which is usually lowered by ropes, belts, or harness lines into the ground. Funeral practices underwent a transformation during the second half of the nineteenth century. Technological advances in the science of embalming encouraged the development of a professional who would "undertake" all of the funeral arrangements for the family, ushering in the birth of the modern undertaker or funeral director.

One of the most direct and unaltered manifestations of the African influence on the culture of African Americans is found in the social behaviors associated with funerals. Funeral customs were one of the few areas of black life into which white slave owners tended not to intrude. In spite of the conversion of most blacks to Christianity, they retained many of their former rituals associated with the veneration of the dead. They believed, for example, that the spirit of the deceased person might linger for a time before moving to the spirit world. They also believed that the needs of this spirit were similar to those of a living human and that the potential anxiety of a person's spirit could be soothed by presenting it with an item or items the individual had used while alive.

In order to reconnect the dead with the living as well as soothe the soul of the departed, the personal property of the deceased was frequently placed on the grave along with wooden markers and floral arrangements. Sometimes mourners left a single item, perhaps a glass pitcher or a vase; other times mourners deposited a veritable inventory of the deceased's household goods-cups, clocks, toothbrushes, and other items. On some occasions, loved ones laid a patchwork quilt or other article recently used by the deceased upon the grave.

The end of slavery after the Civil War did little to integrate funerals and cemeteries in North Carolina. Well into the twentieth century, blacks were usually buried in graveyards attached to black churches, in private cemeteries owned by black organizations (such as fraternal orders), or in "colored" sections of public cemeteries. Many slave cemeteries have been lost to the ravages of time, weather, desecration, and neglect. In some cases, records have been made of black cemeteries, such as those located in Hertford and Gates Counties.

As the twentieth century progressed, North Carolinians and other Americans accepted the role of the undertaker as the director of all activities surrounding a death of a family member. The funeral home now provides almost all the services that the family and community attended to before, including washing and preparing the body, providing the casket, and arranging the viewing as well as the church and graveside services. By the mid-twentieth century, people were encouraged to rename their home parlors "living rooms" so as to remove all connotations of death from the home. The word "parlor" has become permanently associated with the funeral industry.