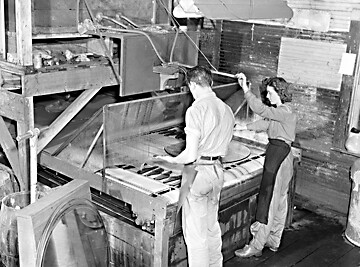 Part iv: Birth and Development of the Modern Furniture Industry

By 1939 North Carolina was the national leader in total production of wood household furniture. Marketing techniques were an important factor in the phenomenal rise of the North Carolina furniture industry throughout the twentieth century. The American furniture industry created a unique marketing system in which larger cities such as New York and Chicago became national exhibition sites where manufacturers displayed their products and took orders. Furniture dealers and buyers visited these halls at least twice a year, viewing a variety of lines from across the country. North Carolina manufacturers brought the concept home to High Point and eventually created the largest marketing center for home furnishings in the world. On 20 June 1921 the Southern Furniture Exposition, Inc., opened a ten-story building in High Point, complete with 249,600 square feet of exhibition space. Over two weeks, 700 dealers viewed 149 exhibits, and sales came close to $2.25 million. The exposition was held twice a year with increasing numbers and strengthened North Carolina's stature as a national leader in furniture production.

Throughout the second half of the twentieth century, North Carolina continued to lead the nation in production of both upholstered and wooden household furniture. A large number of manufacturers provided relatively stylish and inexpensive furniture for all economic classes. Although many furnishings lost their unique regional quality as North Carolinians became part of a national marketplace, a number of local artisans continued to produce unique, high-quality products.

The 1980s marked the "golden era" of the North Carolina furniture industry, when employment peaked at 90,000 people and the state added nearly 200 new furniture companies to its ranks. However, the boom did not continue. Trouble began in the 1990s with the globalization of the industry and an increase in free trade, resulting in competition from foreign furniture corporations and necessary cost-cutting measures from U.S. firms. The outsourcing of production services to Latin American and Asian countries led to a large decrease in furniture production and employment in North Carolina. China became the North Carolina furniture industry's most effective competitor, producing furniture of equal quality that was available to consumers at a lower price.

North Carolina saw the closing of 47 furniture companies during the 1990s, and the negative trend continued after 2000 with dozens of additional company closings. By 2006 it remained unclear how far the industry would fall before stability was reached, although some believed North Carolina's increasing affluence and urbanization would eventually reverse the economic hardships the industry had experienced.