Kaye Gibbons is a North Carolina writer who has risen out of poverty and difficult circumstances to produce a series of successful novels. 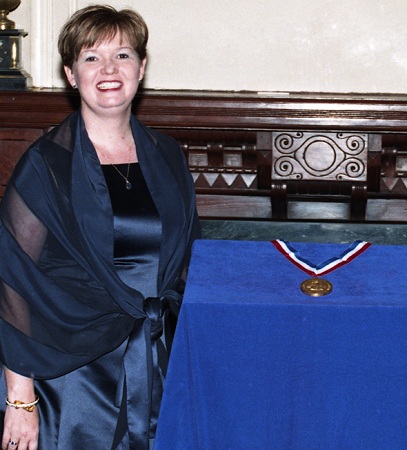 Gibbons was born Bertha Kaye Batts in Nash county, N.C. on May 5, 1960. She had a poor and troubled childhood from which she has drawn liberally to create her novels. She grew up in a tin-roofed house with an alcoholic father and no electricity or running water. Like the title character of her debut novel Ellen Foster, Gibbons' mother committed suicide when she was ten years old. Gibbons' father died just three years later, in 1973. She was passed around from relatives to foster parents before living in relative stability with her older brother David. She attended North Carolina State University in 1979 and then transferred to the University of North Carolina at Chapel Hill in 1980, where she met her writing mentor, professor Louis Rubin. He encouraged her to write Ellen Foster. College was also where Gibbons was first diagnosed with the manic-depression that has affected her on and off her entire life. Although the disorder caused her to attend college irregularly, she finally obtained her degree in American literature in 1987.

Gibbons' semi-autobiographical first novel, Ellen Foster, was published in 1987 by Algonquin Books of Chapel Hill. It won the Louis D. Rubin, Jr. Prize in Creative Writing from UNC-CH, a Special Citation from the Ernest Hemingway Foundation, and the Sue Kaufman Prize for First Fiction from the American Academy of Arts and Letters. In 1988, she became NCSU's first author-in-residence. The CBS television network adapted Ellen Foster into a Hallmark Hall of Fame television movie which aired December 14, 1997.

Her second novel, A Virtuous Woman, was published in 1989 and tells the story of a marriage, jumping in time to show the perspectives of both the dying wife and the widowed husband.

Gibbons received a National Endowment for the Arts grant to write her third novel, A Cure for Dreams, published in 1991. This novel paints a portrait of three generations of women: grandmother, mother, and daughter, and won the Chicago Tribune Nelson Algren Heartland award for fiction, the Sir Walter Raleigh Award for Fiction from The Historical Book Club of North Carolina, and the 1990/PEN Revson Award for the best work of fiction published by an American writer under the age of thirty five.

Her fourth novel, Charms for the Easy Life, published in 1993, was adapted into a made-for-television movie for the Showtime Network that aired August 18, 2002. Both novels feature strong female protagonists living in rural North Carolina during the early twentieth century. The novels were helped to life by Gibbons' research into oral histories collected by the Works Progress Administration during the Great Depression.

Her fifth novel, Sights Unseen, was published in 1995. It pulls from her own life experiences to tell the story of a daughter as she comes to term with her mother’s manic-depression, and the effects it has on her family. It was not until this novel that Gibbons spoke openly about her own struggle with mental illness.

On the Occasion of My Last Afternoon was published in 1998, and departed from her earlier novels, being a historical novel beginning in the 1840s and climaxing with the Civil War.

In 1997, talk show host Oprah Winfrey made Ellen Foster and A Virtuous Woman selections in her highly popular book club. The French government awarded her the title of Chevalier de l'Ordre des Arts et des Lettres – (Knight of the Order of Arts and Letters) in 1996. In 1998, she received the North Carolina Award for Literature, and in 1999, NCSU awarded her the honorary degree of Doctor of Humane Letters. Gibbons even played a pivotal role in the publication of her friend Charles Frazier's 1997 highly successful novel Cold Mountain, encouraging him and sending his unfinished manuscript to her agency.

While the 1990s were a productive and rewarding time for Gibbons, they were also tumultuous personally. In 1992, Gibbons and her family moved to briefly to California, but soon returned to Raleigh, where she and her husband divorced. In 1993, she married a Raleigh attorney, Frank P. Ward, but divorced acrimoniously in 1995.

Divining Women, published in 2004, is set during World War I. Its heroine attempts to rescue a young wife from an oppressive and abusive husband.

In 2005, Gibbons returned to her first novel to pen a sequel, The Life All Around Me by Ellen Foster, which features her 10 year old protagonist at age 15, flourishing and winning a scholarship to Harvard. In 2006, Gibbons moved briefly to New York City before returning to North Carolina.

Since 2006, Gibbons has written two novels, The Lunatics' Ball and The Secret Devotions of Mary Magdalen, both awaiting publication.

She currently resides with family in Rocky Mount, North Carolina.

Photograph courtesy of the State Archives of North Carolina.

Dear Library staff;
Can you help me locate current information on the author Kaye Gibbons?
Is T. Mike Childs available to talk about her by any chance?
Thanks for whatever help you can offer.
Marsha King
Shoreline, Washington

Hello, thank you for

Hello, thank you for commenting.

T. Mike Childs no longer works with our library. Is there something we can help you with?

I heard about Kaye Gibbons in

I heard about Kaye Gibbons in my Literary club in Franklin, VA and have read Ellen Foster and will be presenting a program on Ms. Gibbons and the book April 14. I went to the library today and checked out THE LIFE AROUND ME BY ELLEN FOSTER. I can't wait to begin reading it. I hope Ms. Gibbons is doing well and would love to know if she is still writing.
Thanks

We are not able to locate any information that indicates whether or not Kaye Gibbons has continued to write or is working on a new book. If we learn anything new, we'll add an update to this entry.

Best of luck with the book club program!

Please note this bio of Kaye

Please note this bio of Kaye Gibbons contains a discrepancy. In one place (red type) year of birth is stated as 1950 and in the body of the text it says 1960. According to the Harcourt Books website Kaye Gibbons was born in 1960. http://www.harcourtbooks.com/EllenFoster/Extended_Bio.asp

You are correct! Thank you

You are correct! Thank you for catching that typo! We have fixed it!