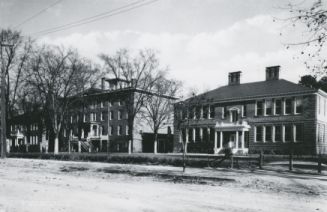 Goldsboro Female College began in 1854 as Wayne Female College in Goldsboro. The institution started as an academy and made the transition to the public school system after the Civil War. The school's first location was the Borden Hotel. The college moved to a new four-story building on North William Street in 1857. During the Civil War classes were suspended, and the college served as a Confederate hospital until 1865, when Union general William T. Sherman occupied Goldsboro on his way to Raleigh. The building then became a Federal hospital that cared for the wounded from the Battle of Bentonville.

Classes resumed in the fall of 1868 under the new name of Goldsboro Female College, with the school rented alternately to the Methodist and Presbyterian Churches for management. In 1874 the school became the Goldsboro High School for Boys and Girls, and in 1881 it was absorbed into the new State Public Graded School System. The building was torn down in 1927.

"Goldsboro Schools--1910--The Middle Building built in 1857 as the Wayne Female College closed in 1862 to become a Hospital for the Confederate Army. " Available from http://www.wcpl.org/genealogy/SCHG19.asp (accessed May 1, 2012).