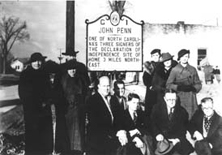 Historical markers in North Carolina are typically freestanding, silver-and-black cast aluminum signs on posts erected along roadsides, but they also include plaques and other forms of commemoration. In 1903 the legislation establishing the North Carolina Historical Commission noted the scarcity of monuments or tablets "commemorating the services of eminent sons of the state, or marking the sites of historic events" and proposed to remedy the situation. The commission assumed its first project in 1910 when it resolved to acquire busts for eight empty niches in the State Capitol rotunda. Between 1903 and 1929, the commission erected approximately 110 bronze tablets across the state in cooperation with local historical and patriotic societies.

C. Christopher Crittenden, secretary of the Historical Commission and the Department of Archives and History from 1935 to 1968, spearheaded the effort to establish a state highway historical marker program. Using a Virginia program begun in 1926 as a model, Crittenden enlisted public support for the project, sought newspaper publicity for the plans, and solicited suggestions from citizens across the state.

The Marker Advisory Committee, a group of college and university professors specializing in North Carolina history, was also established in 1935. The committee weighed the historical authenticity, appropriateness, and relative merit of all subjects proposed for consideration, setting statewide historical significance as the principal eligibility requirement. At their first meetings, the committee members reviewed several proposed models and selected a design resembling the pages of an open book and incorporating the State Seal at the top. The signs are cast aluminum and mounted on concrete posts sheathed in aluminum, with inscriptions limited to five or six lines of about 24 letters and spaces per line. The committee selected the design to enable passing motorists to read the markers. Exceptions are extended text markers using smaller letters, and larger map markers illustrating and describing historic events. The first official state marker, dedicated to one of the state's signers of the Declaration of Independence, John Penn, was erected at Stovall in Granville County on 10 Jan. 1936.

The Department of Conservation and Development initially cosponsored the highway historical marker program. Today the program operates with the cooperation of the Department of Transportation, whose field offices assume responsibility for placement and maintenance. Markers are placed on state-maintained, numbered highways but not on interstate or limited-access routes.

Since 1935, the program has erected more than 1,400 markers, with at least one in each county, and beginning in 1939 administrators issued a continually updated Guide to North Carolina Highway Historical Markers. The program was suspended during World War II because of a materials shortage, and in the early 1980s inadequate funding made it impossible to consider new proposals for several years.

Private markers of varying types and designs have also been placed throughout the state. Between 1913 and 1938, Boone Trail Highway and Memorial Association founder J. Hampton Rich constructed a series of monuments along the supposed travel route of Daniel Boone. Some memorials incorporated a stone or concrete arrowhead or a bronze tablet depicting Boone and his dog. After World War II, the Garden Clubs of North Carolina erected a series of "Blue Star Memorial Highway" markers alongside several major state highways to honor veterans. The State Highway Commission participated in the effort by designating the routes. An individual cannot be considered as a subject for a state marker until 25 years after his or her death, though privately sponsored local groups have more quickly erected markers to some individuals. For example, in 1987 the Burke County Historical Society erected a marker at the birthplace of Senator Sam J. Ervin.

The Office of Archives and History regularly advises local groups, church congregations, and individuals on the private purchase of markers and plaques, which cannot bear the State Seal and must be placed outside the highway right-of-way. The rise of the historic preservation movement led local organizations to designate properties listed on the National Register of Historic Places with plaques, and to delineate boundaries of local historic districts with distinctive street markers.

"An Act to Provide for the Erection of Markers at Points of Historic Interest Along the Public Highways." Public laws and resolutions passed by the General Assembly at its session of 1935. Charlotte: Observer Printing House. 1935. http://digital.ncdcr.gov/u?/p249901coll22,240489 (accessed August 24, 2012).