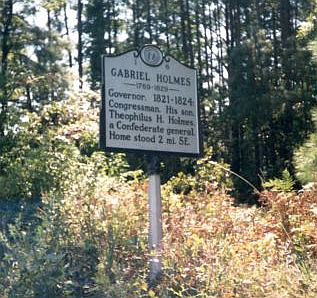 Gabriel Holmes (1769-1829) adopted a Jeffersonian view the importance of the agrarian life. He was the father of Theophilus H. Holmes, a Confederate general. Born in present-day Sampson (then Duplin) County, Gabriel Holmes was one of the seven children of Gabriel and Mary Caison Holmes. He received his preparatory education at Zion Parnassus Academy and later attended Harvard College. Returning to North Carolina, he studied law under future chief justice John Louis Taylor, was admitted to the bar, and began the practice of law in Sampson County. Holmes married Mary Hunter of Wake County, daughter of Revolutionary leader Theophilus Hunter. Their marriage produced six children.

Holmes represented Sampson County in the lower house of the General Assembly from 1793 to 1795 and subsequently in the upper house in 1797, 1801, 1812, and 1813. On eight occasions he was appointed to the Council of State. From 1801 to 1804, and from 1817 until his death, he also served as a trustee of the University of North Carolina. Holmes was defeated for the governorship by Jesse Franklin in 1820, but emerged victorious the following year in a sharply contested election requiring numerous ballots. Inaugurated on December 7, 1821, he began the first of the maximum three terms allowed under the existing constitution.

In his initial address to the General Assembly as governor, Holmes emphasized themes which would come to characterize his years in office. Chief among these were the allocation of limited public monies for education, improved transportation by land and water, and the encouragement of agriculture. Much like President Thomas Jefferson, he vigorously promoted the interests of the common man and the agrarian way of life. While governor, he also served as president of the board of trustees at the University of North Carolina. In that role, he pressed for the introduction of agricultural courses and the establishment of a model farm to demonstrate more progressive farming methods. In full accord with the Jeffersonian view, he stressed the productive and practical uses to which higher education could be put. In 1822, at his urging, the General Assembly provided for the distribution of funds to counties throughout the state to promote the work of local agricultural societies.

In 1825, following the expiration of his third term, Holmes was elected to the United States House of Representatives, where he served until his death. His committee work involved, among other things, militia affairs and the postal system. Like former governor John Branch, who served concurrently in the Senate, he was closely associated in Washington with the interests and policies of Vice-President John C. Calhoun of South Carolina. Holmes died at his home near Clinton on September 26, 1829, and was interred on the grounds.