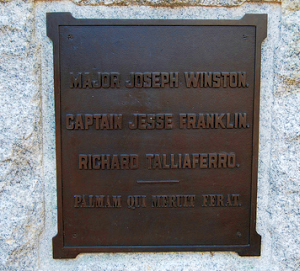 Jesse Franklin (1760-1823) of Surry County, veteran of the Revolution, came to the governor’s office at the age of sixty, his most noteworthy achievement during his term being reform of the penal code. Born in Orange County, Virginia, on March 24, 1760, he was the son of Bernard and Mary Cleveland Franklin. Soon after the outbreak of the American Revolution, the family removed to Surry County. Young Franklin enlisted in the regiment of his maternal uncle, Colonel Benjamin Cleveland, and fought in the crucial battles of Kings Mountain and Guilford Courthouse. By war’s end he had risen to the rank of major. Franklin’s wife was the former Meeky Perkins of Rockbridge County, Virginia. Together they had three sons and five daughters.

Following the Revolution Franklin settled in Wilkes County, which he represented in the House of Commons from 1784 to 1787 and from 1790 to 1792. In December of 1789 he was appointed to the Council of State under Governor Alexander Martin. After returning to Surry County in 1792, Franklin represented that county in the House of Commons in 1793-1795 and 1797-1798, with a single term in the United States House of Representatives during the intervening period.

In 1798 Franklin returned to Congress as a senator, having been chosen by the General Assembly over former and future governors, Alexander Martin and Benjamin Smith. Following a brief return to the state legislature as a senator from Surry in 1805, he was again sent to the United States Senate, where he served from 1806 to 1813. Concurrently, his younger brother Meshack sat in the House of Representatives. In 1814 and 1815 Franklin was defeated in his senate bids by Francis Locke and Nathaniel Macon respectively. In 1816 he was one of three men chosen to negotiate settlements with the Cherokee and Chickasaw Indians, his fellow commissioners being David Meriwether and Andrew Jackson, hero of the War of 1812 and future U.S. president.

On the state level, Franklin continued to represent Surry County in the upper house of the General Assembly, and for four successive terms he again served on the Council of State, under Governors William Miller and John Branch. On December 5, 1820, he was elected governor. By that time Franklin was sixty years old, overweight, and in declining health. Despite these factors, however, he carried out his duties conscientiously and with his characteristic simplicity and practicality. Although a fiscal conservative and an advocate of limited government, Franklin contributed at least modestly to the nascent reform movement led by Archibald D. Murphey. His most notable contributions came in connection with the state’s penal code, which under his urgings was rendered less severe and punitive. He also advocated reform of the state militia and settlement of remaining border disputes with neighboring states. He returned to Surry County at the end of his first term, declining to stand for reelection. Franklin died at his Surry County home on August 31, 1823, following a long illness. In 1906 his body was moved to the Guilford Courthouse National Military Park near Greensboro.