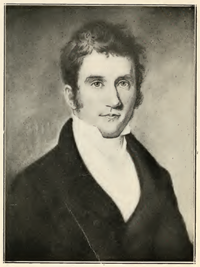 John Branch (November 4, 1782- January 4, 1863), in addition to serving as governor of North Carolina, was governor of the Florida Territory, Secretary of the Navy, and U.S. Senator. Born on November 4, 1782 in the town of Halifax, he was the son of John Branch Sr., and his first wife, Rebecca Bradford. Because of his father’s considerable wealth and local prominence, young Branch benefited from educational advantages and from a comfortable and cultured upbringing. Later, as an adult and public figure, he would be known for his refined tastes and generous hospitality. Branch was twice married. His first wife, Elizabeth Foort, was the mother of his nine children. His second wife was Mary Eliza Jordan Bond.

After attending the University of North Carolina and reading law under Judge John Haywood, Branch entered a long and varied career in politics. In 1811 he began the first of seven terms as a representative of Halifax County in the state Senate, the last term (1822) following his governorship. For two years (1815-1817) he was speaker of that body. Branch was elected governor on December 3, 1817, and began the first of three consecutive terms allowable under the existing constitution.

Significantly, his governorship came at a time when North Carolina was conspicuous in the nation for its provincialism and inertia. As chief executive, he lent his moral and political support to the ambitious reform measures of Archibald D. Murphey. He therefore took significant steps to promote public education, initiate internal improvements, liberalize the penal code, and stem the exodus of North Carolinians to areas of the country regarded as more promising. It was during his governorship that the North Carolina Supreme Court came into being as a separate and independent body.

In 1822 Branch entered national politics with his election to the United States Senate. Subsequently he was appointed Secretary of the Navy by President Andrew Jackson. As a staunch advocate of states’ rights, Branch opposed internal improvements on the national level and was generally Jacksonian in his view of the federal government. He fell out of favor with Jackson, however, during the “Eaton Affair” and, as a result, resigned from the cabinet. In 1832 he sought unsuccessfully to purge vice-presidential candidate Martin Van Buren from the Democratic ticket, and came to be publicly identified with John C. Calhoun and the doctrine of nullification.

After his return to North Carolina following a single term in the federal House of Representatives, Branch’s personal and political opposition to Jackson contributed significantly to the formation and ascendancy of the Whig Party in the state. In the state Constitutional Convention of 1835, Branch argued for the removal of religious qualifications for office and against the disfranchisement of free blacks. In 1838 he was defeated in his bid for a fourth term as governor by Edward B. Dudley, the office having become elective as a result of the progressive reforms three years earlier.

Branch later moved with his family to Florida, and in 1843 was appointed governor of that territory by President John Tyler. Indeed, it was during his term in office that Florida became a state. Branch again returned to North Carolina in 1851 and remained until his death on January 4, 1863. His burial was in Enfield, in his native Halifax County.

Looking into my history need

Looking into my history need to know where I came from .

this is a real fact

this is a real fact