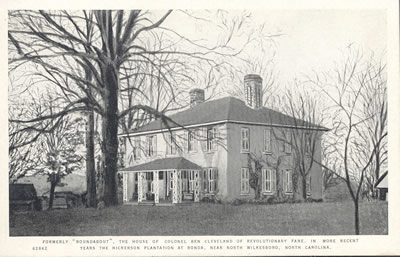 Benjamin Cleveland, frontiersman, was born in Virginia on the now-famous Bull Run. He was the son of John Cleveland and the grandson of Alexander Cleveland, who came from England and settled in Virginia.

Benjamin Cleveland grew to be a very big man, often good-natured, but reckless, hot-tempered, and determined. He loved hunting and spent much of his time from early youth roaming the wilderness securing furs and skins. As a young man, he acquired the frontier lifestyle, which included gambling, horse-racing, carousing, drinking, and fighting. An early marriage to Mary Graves of Orange County helped to reform his wild life, and he made a reluctant attempt at farming.

At age thirty-one, Cleveland emigrated with his extended family to the North Carolina back country, settling near Mulberry Fields, Wilkes County. From his neighbor, Daniel Boone, Cleveland learned of the Kentucky country. In the summer of 1772, accompanied by four "long hunters," he set out to hunt and to explore the Kentucky wilderness. The party was seized and robbed by a band of Cherokees. The Indians took everything, leaving the tattered band to find its way back through miles of wilderness. Cleveland was a fighter and a man of action. Delaying only long enough to regain his strength and to select a party of riflemen, he boldly returned to the Cherokee country, retrieved his horses, and returned in triumph to the Upper Yadkin, his reputation as an Indian fighter solidly established.

When the American Revolution came, Cleveland lived in Surry County, within the Salisbury Military District, one of the six military districts of North Carolina. In September 1775 the provincial congress appointed him ensign in the Second Regiment of the North Carolina Continental forces. He did not accept the appointment, however, preferring to serve in the Surry militia, where he judged his "presence and efforts would be more useful." In the summer of 1776, when the Cherokee uprising began, Cleveland served a tour of duty as ranger on the headwaters of the Yadkin; in August he joined as captain a contingent of Surry militia in the expedition against the Cherokees. During the course of the campaign, the North Carolina and South Carolina forces completely destroyed thirty-six Cherokee towns. Prior to the negotiations at Long Island, Cleveland was stationed at Carter's Fort, from which his company of light horse patrolled the frontier. During the treaty negotiations, his company was ordered to Long Island to protect the negotiating commission.

The exact date on which Cleveland was appointed to the Surry County court is not known, but he sat as a justice for the November term in 1774; in December of the same year, he was appointed by the justices to serve as a juror at the superior court in Salisbury; and at the February term in 1775 he was chairman of the court. On 17 May 1775 news of the Battle of Lexington reached the Surry court. The transition from county court to safety committee was swift and decisive, and Cleveland was elected chairman. The safety committee virtually took over the local military establishment by the process of selecting representatives from each militia company to serve on the committee.

On the Upper Yadkin, the American Revolution was not primarily a conflict of colonists against Redcoats, but one of Americans against their neighbors. Cleveland's suppression of Tories was legitimized in two ways: by punitive legislation and by his authority as chairman of the safety committee, county court justice, and officer of militia. When the new county of Wilkes was formed from Surry in 1778, Cleveland was placed at the head of the commission of justices and was named colonel of the militia.

In 1776 the royal governor of North Carolina initiated a plan to conquer the state, and back country Tories were formed into militia companies. Cleveland took his company of riflemen to join the Surry militia, which summarily dispersed the Tory rising in Surry County. They then proceeded south to march against the Tories on the Cape Fear. "Tory risings" and "Patriot retaliations" were the most significant feature of the civil war on the Upper Yadkin. When Tory prisoners were taken, Cleveland administered punishment with his own sense of rigid justice. Reconstructed Tories were allowed to take an oath of loyalty to the state and were set free; unregenerate Tories were hanged. Cleveland's vigorous methods did not always find support. In the fall of 1779 two Tories were hanged by Cleveland scouts, and for this act he was indicted for murder in the superior court of Salisbury; he was ultimately pardoned by the governor. Cleveland himself was once captured by the frontier Tories, but the quick action of his brother, Robert, brought about his rescue.

In 1780, Lord Cornwallis began an invasion of North Carolina, basing his strategy on the assumption of large-scale Tory aid. Major Patrick Ferguson was instructed to serve as the British left wing on its northward thrust. His task was to arouse and enlist Loyalists in the upland on the western flank nearest the frontier. The over-mountain men accepted the challenge, assembled volunteers, and sent an express to Cleveland requesting him to join them.

On 6 Oct. Ferguson had reached a point near Kings Mountain, an outlying spur of the Blue Ridge near the North Carolina-South Carolina border. The Whigs reached the mountain about noon on 7 Oct., surrounded it, and began action on all sides. Three times Ferguson's men drove them back with bayonet charges, but the mountain men united and pushed him to one end of the ridge. Cleveland's column pressed forward, and as Ferguson attempted to cut through his lines, he was knocked from his horse by rifle fire. When Ferguson fell, the resistance of the Tories crumbled and they surrendered. This battle at Kings Mountain was the climax of the frontier civil war and the turning point of the war in the South.

When the Revolution finally closed, Cleveland was forced to surrender his land. He then migrated into the back country of South Carolina. In 1784 he became one of the early squatters in the Tugaloo River Valley. In South Carolina, Cleveland joined on the bench the old partisan leader General Andrew Pickens, serving as an associate judge of the court of Pendleton County for many years. Before his death, he became so unwieldy in size that he could not mount his horse, gradually attaining the enormous weight of 450 pounds. He died quietly while sitting at his breakfast table, survived by two sons and a daughter. A nephew, Jesse Franklin, became governor of North Carolina.