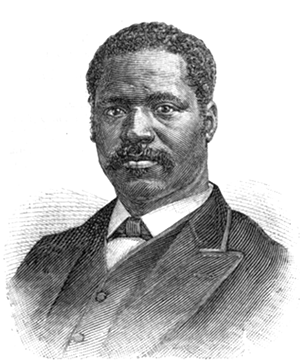 Moses Aaron Hopkins, educator and clergyman, was born into slavery in Montgomery County, Virginia, on December 25, 1846. During the Civil War he worked as a cook in Union camps. In 1866, at age twenty, Hopkins learned the alphabet, launching his lifelong interest in education. He attended Avery College, Allegheny City, Pennsylvania, and graduated from Lincoln University, also in Pennsylvania. Hopkins then enrolled at Auburn Seminary in New York. Completing his degree in theology in 1877, he was the first African American graduate of the seminary. Ordained by the Presbyterian Church in 1877, Hopkins moved to Franklinton.

In Franklinton Moses Hopkins founded Mt. Pleasant Presbyterian Church and Albion Academy. He led Albion through its formative years, which included the construction of an administration building, a shop, and a girls’ dormitory. Hopkins and his wife, Carrie, published a newspaper entitled The Freedmen’s Friend, the masthead of which designates it as “The Organ of Albion Academy and Our Race.” The only known issue is from August 1884. In 1885 Hopkins applied to the Democratic Party for a diplomatic post and was appointed Minister to Liberia on September 11 of that year. He reported to Monrovia within a month. Moses Hopkins died in Monrovia, Liberia, August 7, 1886. (Though most published sources list his death date as August 4, a researcher contacted the Department of State in 1950 to verify the date. The Chief of Historical Policy Research located a telegram dated August 9, 1886, sent to the American Colonization Society announcing that Hopkins died on August 7.) His place of burial is unknown.