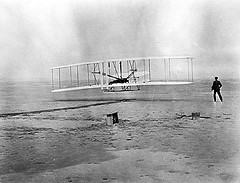 North Carolinians have produced thousands of inventions-new machines, unique processes, and other original products-in home workshops, factories, and scientific laboratories and on farms. Since 1790 most of these inventions have been recorded at the U.S. Patent Office in Washington, D.C. During the nineteenth century, North Carolinians patented approximately 2,000 inventions. The first North Carolinian issued a federal patent was G. F. Saltonstall of Fayetteville, who in 1801 registered his design for a cotton-cleaning machine. Richard Jordan Gatling, born in Hertford County in 1815, is best known for developing and patenting in 1862 the Gatling gun, a hand-cranked, multibarreled, revolving weapon. He also devised scores of new agricultural machines, tools, and transportation devices.

Other North Carolinians patented early machine guns. Orange County resident Grey Utley patented such a weapon, along with many other inventions. His rapid-fire "Carolina Cannon" was registered in 1858, a full four years before Gatling obtained the patent for his gun. During the Civil War, J. W. Howlett of Greensboro also invented a new breech-loading firearm, recording it with the Confederate States Patent Office in 1862. Yet another inventor in this period was Parker D. Robbins, a free black landowner from Bertie County. In addition to being a soldier in the Union cavalry and a representative in North Carolina's postwar legislature, Robbins was a first-rate mechanic. In the 1870s he registered patents for a new cotton cultivator and a saw sharpener. Greene County's Hardy Spears, also an African American, received a patent in 1870 for a protective device for soldiers, described as a "portable shield with gun slots."

North Carolina women also patented new machines, medicines, and, at least in one case, architectural designs. Harriet Irwin of Mecklenburg County secured a patent in 1869 for her design of a hexagonal house, which supposedly had many advantages over traditional four-sided structures. Irwin built a version of her house on West Fifth Street in Charlotte. Two other female inventors, Mary H. Ramsaur of Lincolnton and Lizzie E. Brady of Gatesville, patented special medicinal formulas around this time. 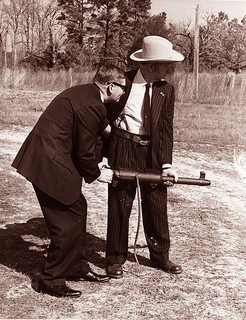 In North Carolina, as elsewhere in the nation, the rapid industrialization and urban development of the late nineteenth and early twentieth centuries prompted a dramatic rise in the number of patents being issued to inventors. The state at this time was the site of the successful test of a machine that would revolutionize transportation, both military and commercial. On 17 Dec. 1903, on the wind-swept dunes of Kitty Hawk in Dare County, Ohio inventors and aviation pioneers Orville and Wilbur Wright achieved the world's first sustained and controlled flight of an aircraft. The Wright brothers had come to North Carolina to take advantage of Kitty Hawk's steady breezes and unobstructed shoreline.

During World War II, U.S. soldiers relied heavily on the M-1 carbine, a semiautomatic rifle invented by David Marshall Williams of Cumberland County. The army ordered more than 8 million of these famous rifles. Eventually, "Carbine" Williams recorded more than 50 patents for firearm mechanisms, producing innovative gun designs for the Colt, Remington, and Winchester companies from his small workshop in Godwin.

During the last decades of the twentieth century, North Carolina's increasing investment in high-tech industries further inspired the creativity of native sons and daughters in areas such as aerospace design, pharmaceuticals, medicine, nuclear engineering, and computer science. William F. Troxler, for example, saw his small basement workshop grow into a multimillion-dollar international electronics firm. A native of Thomasville and a graduate of North Carolina State University, Troxler in the late 1950s and early 1960s began making highly specialized components for satellites, navigational instruments, and nuclear gauges. Worldwide interest in his products resulted in the establishment of Troxler Electronics and fueled his company's rapid development in the Research Triangle Park during the 1970s and 1980s.