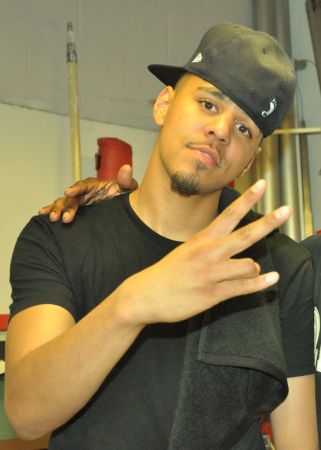 Jermain Lamar Cole, better known by his stage name, J. Cole, is a Grammy-nominated rapper, singer and producer from Fayetteville, NC. In 2009, he became the first artist to be signed to Jay-Z's Roc Nation label.

Before being signed to Roc Nation, Cole worked as a bill collector. Cole apparently waited for days outside Jay-Z's office in order to give him a demo, and the first time they met, Jay-Z apparently "shunned" him. Needless to say, Cole was suprised when weeks later Jay-Z's associates got in contact with him regarding a record deal and a guest appearance on the song "A Star is Born" off Jay-Z's then upcoming album The Blueprint 3.

The music video for his first single, "Who Dat," was shot in his hometown, Fayetteville. There was controversy surrounding the use of local college cheerleaders from Fayetteville State University and a local high school marching band from E.E. Smith High School for the video. The entire music video is one continuous shot with no cuts.

Following three successful mixtapes, The Come Up in 2007, The Warm Up in 2009 and Friday Night Lights in 2010, Cole relased his debut album Cole World: The Sideline Story on September 27, 2011 on N.C. Hip-Hop Day. His sophomore album is expected to be released in June 2012.

Besides music, Cole enjoys playing basketball. After working with EA Sports to produce the soundrack for NBA Elite 11, he and fellow North Carolinian 9th Wonder appeared as "secret characters" in the video game NBA Jam. He also played for the Eastern Team in the 2012 NBA All-Star Weekend Celebrity Game.

In March 2012, Cole returned to his hometown, Fayetteville. He released the song "Visionz of Home" and launched an event titled "Dreamville weekend" to inspire the youth of Fayetteville to achieve great things.

"N.C. Hip-Hop Day sent mixed messages about the state of local rap," from the Independent Weekly