"Our purpose is to educate as well as entertain." -Curtis Mayfield 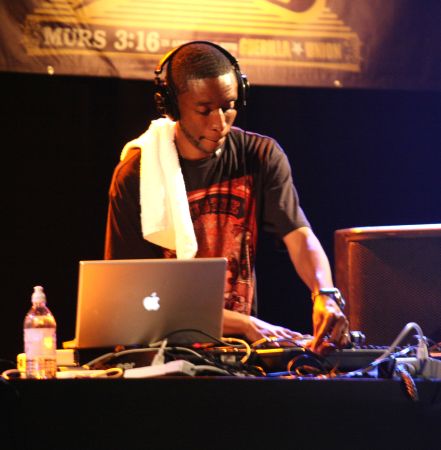 Patrick Denard Douthit, better known by his stage name, 9th Wonder (or, since 2010, 9thmatic), is a record producer and record executive from Winston Salem, NC. He is also a Grammy award-winning producer, DJ, college lecturer and social activist.

His collaborations with the "old school" group Little Brother drew from East Coast inspirations like De La Soul, A Tribe Called Quest, the Roots and Black Star, while his own "smooth and soulful production style" relies on samples from artists like Al Green and Curtis Mayfield. The bass lines that he uses in production are influenced by "DJ Premier, Pete Rock and J Dilla, while he claims to have learned 'Aahs' from the RZA."

In his early years, 9th Wonder played in the school band and learned the basics of several instruments.

He attended North Carolina Central University in Durham, where he met Phonte Coleman and Thomas Jones (Big Pooh). He began his music career in 1998 when the three of them formed the hip-hop trio Little Brother. They gained wide recognition when their first album, The Listening, was released in 2003 to critical acclaim. The album's success led to a non-exculsive deal with major label Atlantic Records.

That year, 9th Wonder began to receive further attention after remixing Nas' 2002 album, God's Son, renaming it God's Stepson. Although he claims that he "didn't even think anybody was going to hear it," the album has since been credited as starting the now regular trend for unofficial "home-made" remixes of whole albums.

Although well known in alternative hip-hop circles, he has also produced tracks for mainstream artists like Jay-Z and Destiny's Child. He produced the track "Threat" for Jay-Z's seminal album, The Black Album, as well as "Girl" and "Is She the Reason," plus the bonus track "Game Over," for Destiny's Child 2004 album Destiny Fulfilled.

He won a Grammy with Mary J. Blige for producing the track "Good Woman Down" or her album The BreakThrough.

9th Wonder left Little Brother in 2007. When asked about the possibility of hooking back up in the future, 9th Wonder replied: "Never say never." On September 27, 2011, he released his first "proper" solo effort, The Wonder Years as a part of "N.C. Hip-Hop Day."

9th Wonder is a professor at NCCU (along with Christopher "Play" Martin from hip-hop group Kid-n-Play) and Duke, where he teaches courses on hip-hop like "Hip-Hop in Context, 1973-1997," "Sampling Soul," and a class on Nas' album Illmatic. He was recently appointed the National Ambassador for Hip-Hop Relations and Culture for the National Association for the Advancement of Colored People, and even more recently, 9th Wonder accepted a year-long residency at Harvard's Hip-Hop Archive.

Other pursuits include scoring music for the Aaron McGruder's critically acclaimed series "The Boondocks." After working with EA Sports to produce the soundrack for NBA Elite 11, he and fellow North Carolinian J. Cole appeared as "secret characters" in the video game NBA Jam. In 2010, independent filmmaker Kenneth Price documented 9th Wonder's travels for an entire year, the footage from which was compiled into a documentray film entitled The Wonder Year.

He resides in Morrisville, NC.